Home > Events > Fireside chat on the Future of Multilateralism

Fireside chat on the Future of Multilateralism

The Center for International Relations and Sustainable Development hosted a debate ‎at the Harvard Club of New York between Ian Bremmer, President of Eurasia Group, and Vuk Jeremić, Serbia's candidate for UN Secretary-General. 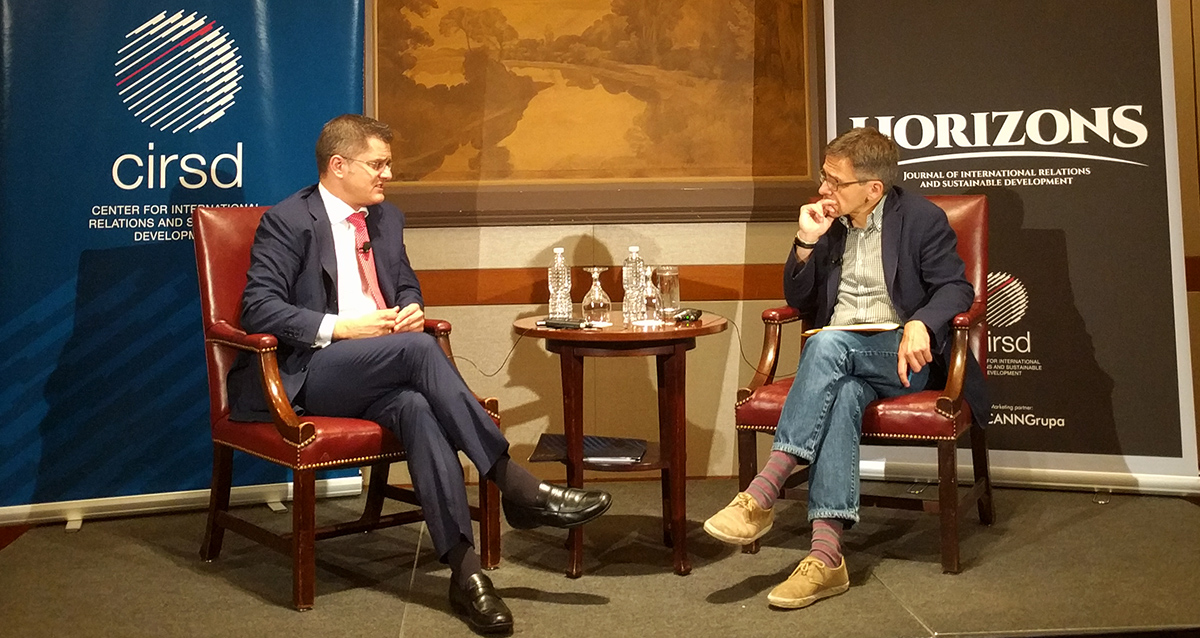 The topic of this invitation-only high level event, which took place on June 30th, 2016, ‎was "The Future of Multilateralism."

Jeremić and Bremmer exchanged views on a number of critical challenges facing the international community, before taking questions from a distinguished audience of diplomats, UN officials, academics, and business leaders, as well as representatives of the American and international media.

Bremmer  underscored the geopolitical significance of one of the most important contemporary global trends, namely that "people across the world are losing trust in their institutions," and pointed to how this affects the United Nations.

In response, Jeremić said that "we must do everything in our power to make the UN fit for purpose. The next Secretary-General needs to be politically savvy, as well as operationally agile and innovative."

Bremmer and Jeremić devoted the first part of their debate to the latter's policy platform containing 53 specific and concrete ‎commitments that the candidate for UN Secretary-General has pledged to implement should he be elected to the post.  Bremmer noted that "as of lately, the position of Secretary-General has become almost synonymous with being ineffectual." Jeremić stressed the imperative of peacekeeping reform, outlined plans for how to‎ improve UN humanitarian relief, conflict prevention and peacekeeping operations, as well as other priorities specified in his platform (available in English and French).

Jeremić ‎emphasised that, as currently configured, the UN is "failing to inspire humanity. Fewer and fewer people even bother to ask nowadays 'where's the UN when‎ you need it?' There's an increasing assumption that they won't be around. That has to change."

In the second half of the discussion, topics covered by Bremmer and Jeremić included‎ the political and economic consequences of Brexit,‎ the unraveling of the Middle East and its effects on refugee flows, and the nexus between security and development.

During the Bremmer-Jeremić debate on the future of multilateralism, the latest issue of Horizons, official journal of CIRSD was also promoted and distributed.