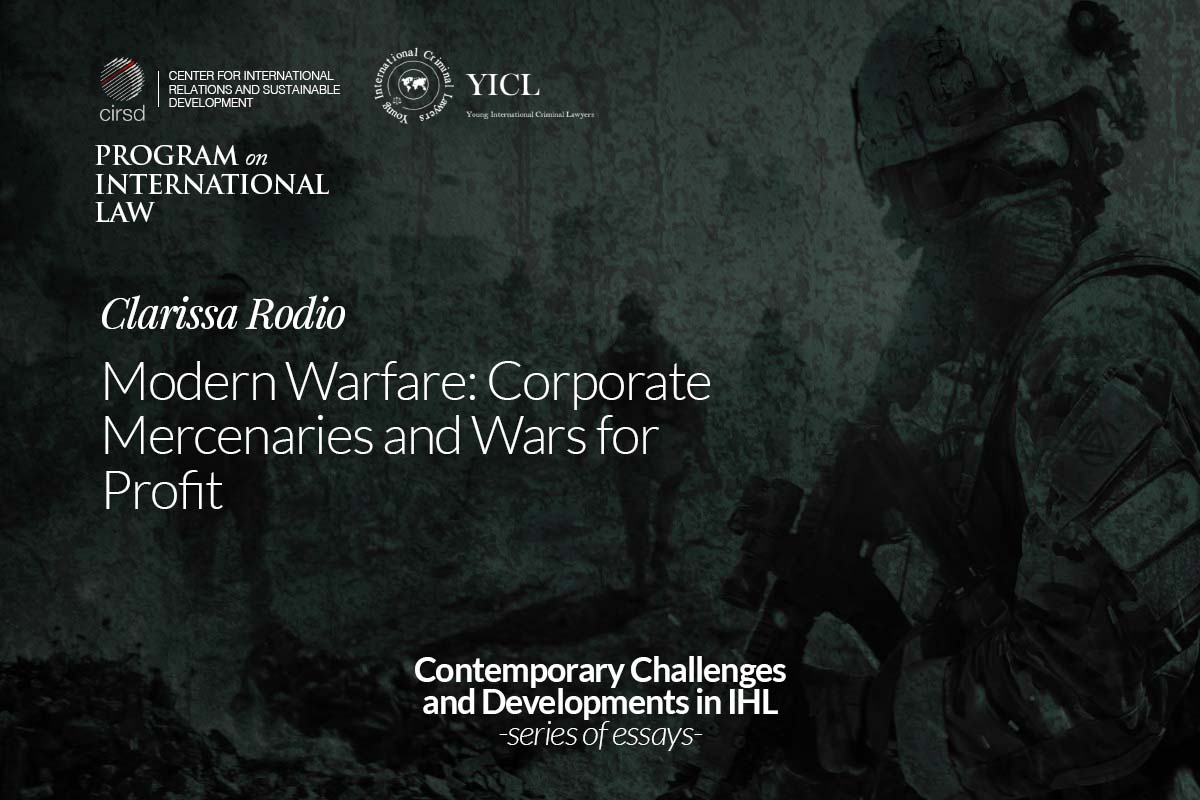 Author:
Clarissa Rodio
Clarissa Rodio is a Junior Associate at Guernica 37 Chambers in London. She has been part of the legal team calling on the International Criminal Court (ICC) to investigate war crimes and crimes against humanity allegedly committed by the Saudi-led coalition in Yemen. Clarissa is conducting a project on Yemen at the Human Rights Center, University of California, Berkeley School of Law, focusing on the field of mercenaries.

Mercenaries are referred to as the “world’s second-oldest profession”. The private military force began to be stigmatised as a result of nation-states that effectively outlawed the private force: the Westphalian world order. The end of the Cold War catalysed an emergence of mercenary activity, which started to increase across the globe.

The use of mercenaries is growing exponentially. Recently, two former German soldiers planned to establish a mercenary force to fight in Yemen and offer their services to Saudi Arabia’s government. The UN Panel of Experts accused Russian instructors of being involved in hostilities in the Central African Republic, who have been identified as Wagner affiliates, the Wagner Group. Latin American mercenaries, particularly the Colombians, have also been involved in Yemen in support of the Saudi-led coalition. The United States still carries the stigma linked to Blackwater (now Academi) founded by Erik Prince, particularly the tragic event known as the Nisour Square massacre in 2007.

This essay addresses the legal distinction between PMCs and mercenaries, followed by their status under International Humanitarian Law (IHL), which is a grey area within international law. Finally, their activities reflect a pattern of conduct that may be described as being above the law due to a persistent lack of accountability which, as a consequence of the uncertainty around the terminology and status under IHL, leads to legal opportunism.

The definition of a mercenary is found in Article 47 of Additional Protocol I to the Geneva Conventions (API) which stipulates six cumulative conditions in order to be classified as such. The definition has been expanded to cover situations other than armed conflicts, specifically in Article 1 of the International Convention against the Recruitment, Use, Financing and Training of Mercenaries (the Mercenary Convention). Interestingly, only 37 States have ratified the Mercenary Convention, among which are Saudi Arabia and Syria.

There is a general consensus that the definition is merely unworkable, because it focuses on three main characteristics: motivation, nationality and absence of affiliation with the armed forces of a Party to the conflict. These can be circumvented in the following ways: firstly, motivation by the desire for private gain is difficult to prove; secondly, the nationality criteria is inadequate due to the narrow definition that requires no national association with any Party to the conflict; thirdly, mercenaries can be part of the armed forces by either formally enrolling into the army to gain the status of combatants, or they could be part of the armed forces as civilian contractors.

The UN Working Group on the use of mercenaries defined PMSCs as “a corporate entity which provides on a compensatory basis military and/or security services by physical persons and/or legal entities”. A factor to take under scrutiny is that also PMCs are perceived as being motivated by profit, in the same manner as mercenaries.

Dr Sean McFate, a former PMC, made a significant assertion in this regard: “if an armed contractor can do one of these functions, they can do all of them. There is no bright line between them. […] Consequently, there is no meaningful distinction between a “private security contractor,” a “private military contractor” and a “mercenary”.”

In essence, if an individual possesses the skills to be a PMC, he can be a mercenary as well, thereby obliterating any meaningful legal distinction.

The status conferred upon PMC employees under IHL when resorting to force remains a challenge, raising questions as to whether they can be considered mercenaries, civilians or combatants. Article 47(1) API provides that “[a] mercenary shall not have the right to be a combatant or a prisoner of war.”

Firstly, the category of mercenary is impractical because it is conspicuous that the aim of the aforementioned Conventions is to eliminate this practice. To some extent, these can be classified as unlawful combatants, hence analogous to the status of terrorists, depending on the nature of their functions. Secondly, PMCs are commonly deemed as civilians. According to Article 26(b) of the Montreux Document, PMSCs’ personnel are protected as civilians, unless incorporated into the armed forces. Thirdly, the status of a combatant is determined by reference to membership in the armed forces, (Article 43 API), and by reference to members entitled to prisoner of war status (POW) (Article 4 of the Third Geneva Convention (GCIII)), which applies to international armed conflicts (IACs). There is no POW status in non-international armed conflicts (NIACs), leading to further challenges due to the absence of an official combatant status.

Nevertheless, the Commentary of Article 4 GCIII states that PMSCs might qualify for POW status if incorporated into the armed forces; or if contracted to perform a combat role, belong to the State and fulfil four conditions. However, if PMCs are incorporated into the armed forces, the State would have to formally include them, thus giving rise to questions whether a State wishes to exercise jurisdiction over members of PMCs who can be “subject to an internal disciplinary system” (Article 43 API).

Furthermore, PMCs might not be fully aware of their status under IHL in a situation of armed conflict – whether an IAC or NIAC – hence unaware of the consequences if war crimes are committed.

The challenges regarding the terminology and status under IHL lead to a considerable accountability gap concerning PMC activities. Individual criminal responsibility is an option, although potentially problematic if, for example, individuals claim immunity agreements between contracting and territorial States as government contractors. Another issue is whether a chain of command can be proved, implying a form of military control. Hitherto, PMC employees have not been charged with any crimes, whilst military personnel have faced prosecution. A clear example is the case of torture in Abu Ghraib prison in 2004 where private military contractors have tortured detainees along with U.S. military personnel.

A further option is relying upon the doctrine of superior or command responsibility. However, the challenge that arises is which individual within the PMC would be considered a commander due to the apparent absence of a particular hierarchy. Therefore, the problem persists as to whether this is applicable to an PMC employee, whether a commander-subordinate nexus can be established and whether an employee ought to be seen as part of the armed forces.

Establishing corporate responsibility can be problematic as well, since PMCs can create separate legal entities in the form of foreign subsidiaries overseas. There is a risk that parent companies would evade liability when extraterritorial human rights abuses have been committed by its subsidiaries, or when such companies are dissolved and new ones are set up with different names.

State responsibility in connection with crimes committed by private contractors is not only complex, but practicably impossible, unless the incorporation of PMC employees into the armed forces of the hiring State is proven. The challenge primarily involves establishing a government nexus, which is certainly arduous.

The increasing presence of PMCs in armed conflicts demonstrates serious challenges under IHL. The vague distinction between PMCs and mercenaries might be interpreted as two different labels bearing an identical meaning. Their status under IHL is uncertain and perspicuity is necessary. As far as accountability is concerned, international law provides a pathway towards individual criminal responsibility and superior/command responsibility, whilst establishing corporate criminal liability as well as State responsibility present enormous challenges.

This type of modern warfare will become part of future conflicts. Those who hire ‘corporate mercenaries’ perpetuate conflicts around the globe, particularly in conflict-prone countries due to financial incentives, rendering them indispensable since they offer exceptional combat capabilities and are willing to disregard human rights for private gain. The reality is that private wars also prolong insurmountable suffering upon the people, ergo amounting to the most powerful threat to international peace.

This Essay is part of the series “Contemporary Challenges and Developments in International Humanitarian Law”, published in collaboration with the Association of Young International Criminal Lawyers.