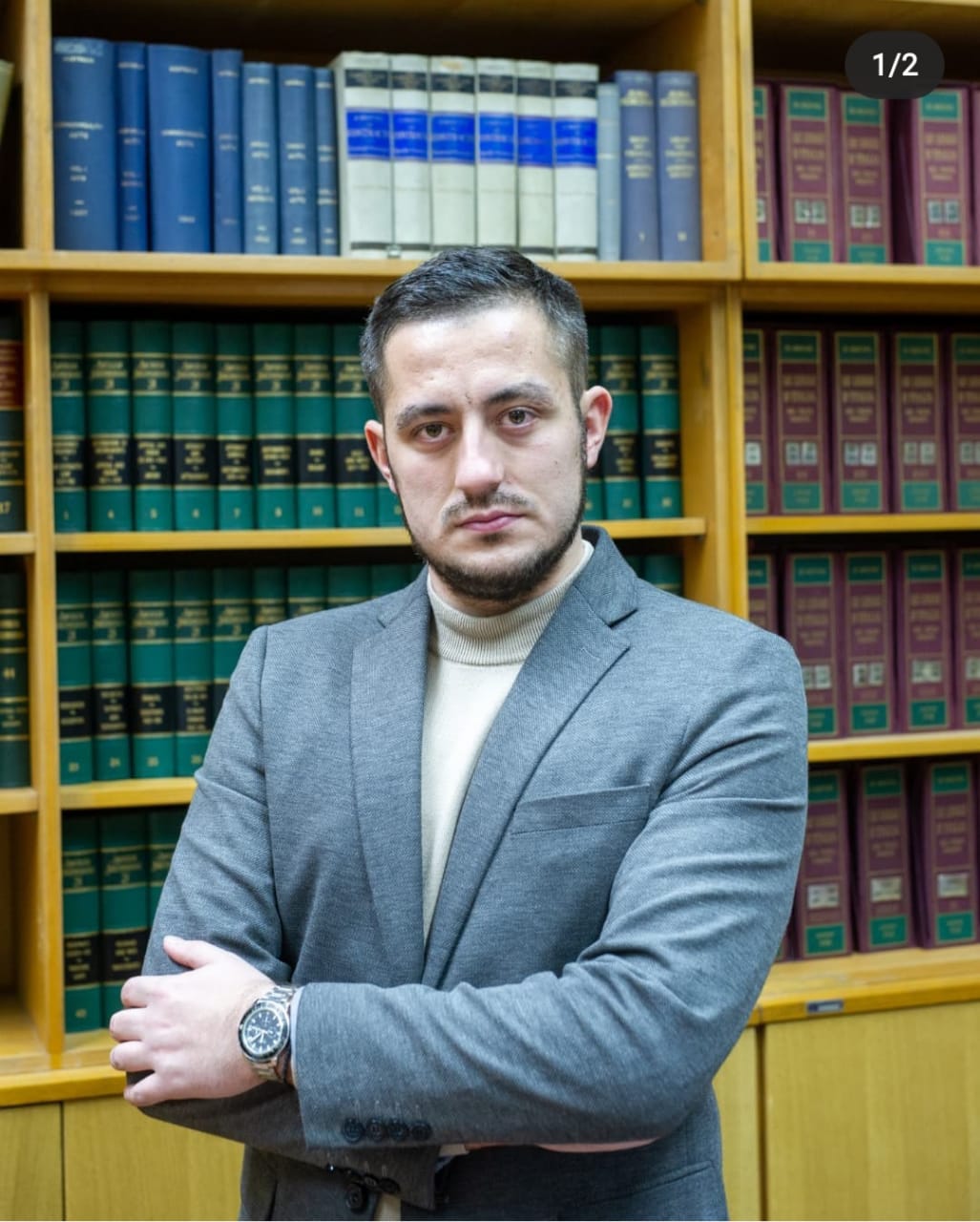 „If you thought Novak had a God complex, he’s got nothing on Australia’s immigration minister“, wrote Sarah Martin in The Guardian, after Alex Hawke, Australia's Minister of Citizenship, Migrant Services and Multicultural Affairs, passed a discretionary administrative act to revoke Novak Djoković's visa. The Minister decided to use the opportunity left to him under the Migration Act, after the Court annulled the decision of the border officers and returned the visa to Djokovic. 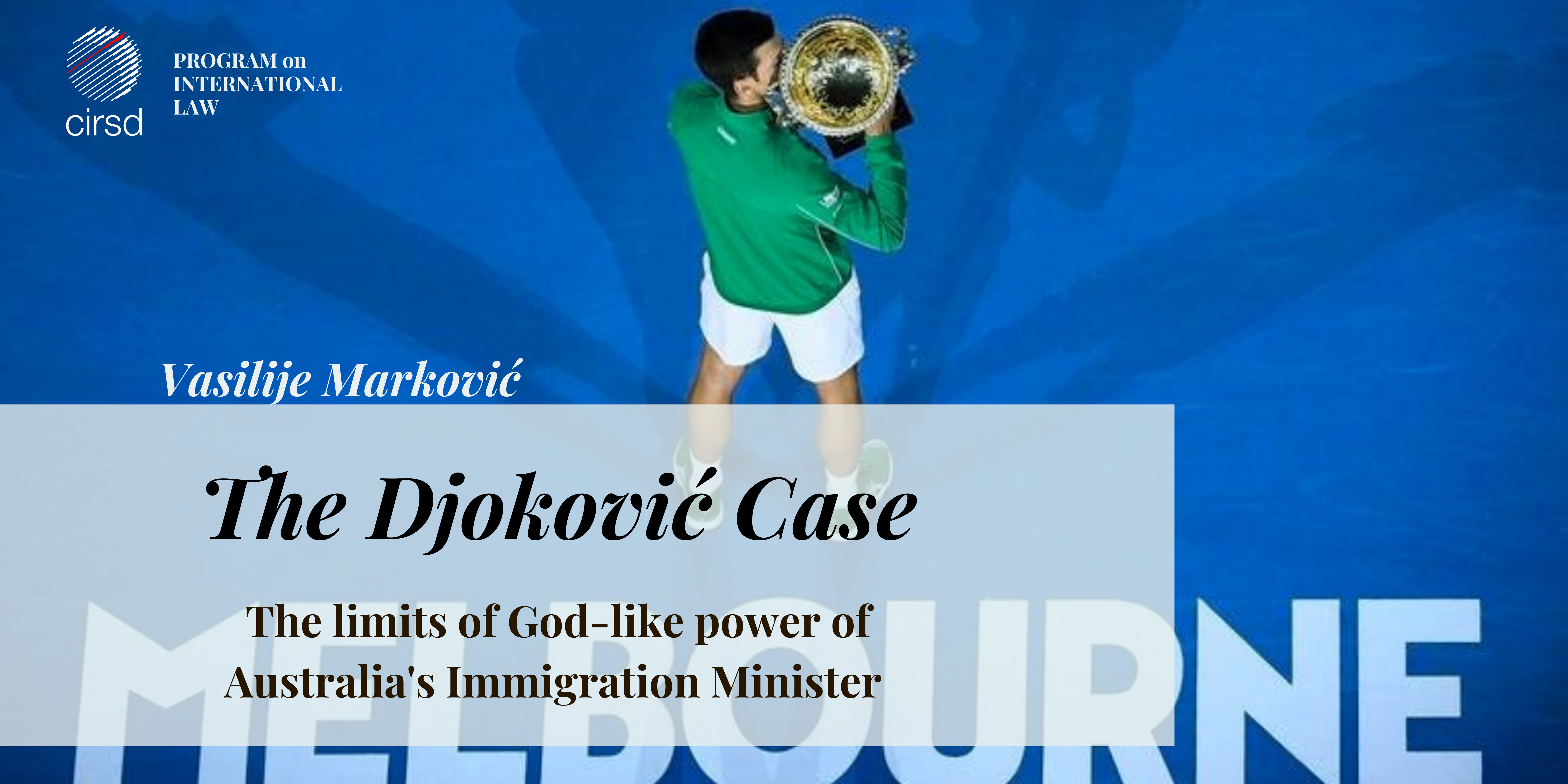 Although Djokovic and his legal team appealed against the Minister’s decision, a three-judge panel of the Federal Court of Australia, with James Allsop as Chief Justice, dismissed the appeal. He was subsequently deported and therefore unable to compete in the Australian Open.  Due to the implications to public health, sports as well as the political overtone, the case caused significant interest and great controversy. However, considering that the issue is—at its essence—a legal one, an effort should be made to shed light on several aspects that may clarify rendering the disputed decision by Minister Hawke. In relation to this there should also be a clarification as to how and why the Federal Court afterwards upheld the visa cancellation.

The first question, that puzzled both the international and the Serbian public, was how the Minister—as the holder of executive power—had the authority to review court decisions. This issue was placed in the context of a wider debate of constitutional law theorists on the separation of powers and the relationship between the judicial and executive branches of government. Regarding this dilemma, it should be noted that Minister Hawke's decision is legally completely independent and does not represent a review of the court decision, nor does it mean that the judicial branch in Australia is subordinate to the executive. Or, to use a tennis analogy: the Australian executive branch—just like a tennis ball machine during practice—fired as many balls at Djoković as it had at its disposal within the country's legal system, at high speed and in a very aggressive manner. Djoković, with the court’s help, returned the first ball which was the administrative procedure led by the border police. His second return landed outside the tennis court, and unfortunately sent him on his way home.

The possibility of passing a discretionary administrative act—albeit used in a not so gentlemanly manner by Minister Hawke—does not per se epitomize the unleashed omnipotence of the executive branch or complete disregard for judicial decisions. Discretionary administrative acts exist in all legal systems, including the Serbian, and they are necessary, because unlike the so-called law bound administrative acts—which must be entirely based on existing legislation—discretionary acts allow a certain degree of freedom when making a decision. The administrative authority is permitted by law to assess whether a certain act should be passed or not, and what its essence will be, having regard to what best suits the public interest. This elbow room has proved necessary, since the legislator cannot predict in advance the whole range of specific life situations in which the law will be applied. In addition, the executive branch, whilst implementing policy, must have some space for a more lively and flexible approach to law enforcement in particular situations. Therefore, the problem with discretionary powers lies not in their sole existence, but rather in the limits of their use, and more importantly, in finding balance in controlling them. Ensuring this legitimate need is not exposed to uncontrolled abuse and arbitrariness—to which, as history testifies, the executive power of the authoritarian and fascist regimes is not immune— does not mean completely annulling the existence of discretionary assessment. Instead, the process needs to be legally shaped in a way that it does not lose any of its creative potential, while at the same time being adequately limited. Determining the exact scope of judicial review over discretionary acts, including the one passed by Minister Hawke, is certainly one of the most sensitive issues of administrative law. Throughout the world, judicial control of such acts stops at the limits of their legality, without examining their appropriateness.

The control over the legality of discretionary acts exercised by the courts in Anglo-Saxon law, which includes Australia, is very restrictive and based on a schematism that emerged as a result of opposing views—those who described the very possibility of the administration being free in its actions as "constitutional blasphemy", and those who sought to prevent the courts from assessing the appropriateness of administrative decisions. Essentially, the schematism of judicial review of discretionary acts in Anglo-Saxon countries rests on two pillars. One is the examination whether competence was exceeded during the passing of the act (ultra vires), and the other is whether the principle of natural justice has been respected. In his act, Minister Hawke referred to paragraph 3 of Article C133 of the Migration Act, according to which the Minister has the authority to cancel a visa if he believes that it would be in the public interest to do so. The discretionary authority given to the Minister by this provision is so broad that, during the Djoković case, it was referred to by the colloquial name "God's authority" in the Australian public. When examined further, it becomes clear that it is a well-deserved epithet, because paragraph 3—unlike paragraph 1 which also mentions the possibilities of visa cancelling—excludes the application of the concept of natural justice. Therefore, the narrowly established judicial review of such acts in Australian law became even more narrow in the case of Novak Djoković. In other words, the possibility for the court to annul Minister Hawke's act came down to only one pillar: examining whether competence was exceeded (ultra vires). This examination could be based on several aspects:
a) the first is whether the discretionary act was passed by the competent administrative authority—which was indisputable in the given case, because Minister Hawke was authorized on the basis of the law;
b) the second is whether discretionary power has been abused—due to ulterior motives or because the relevant facts were not previously determined. Moreover, it could have been argued that Minister did not act in bona fide. In the Djoković case, all these reasons could have been invoked as potential grounds for the court panel to annul the act of Minister Hawke. However, Djoković’s lawyer chose a different approach and built the entire argument on the third aspect of the examination.

c) the third aspect is examining if an unreasonable decision has been made in this particular case. To prevent this examination of the fairness of the decision to encroach on appropriateness—which is prohibited when it comes to discretionary acts—the case law has crystallized, through the Wednesbury test, the criteria according to which decisions are considered unreasonable: if the administrative authority did not consider all the prescribed elements, and if no reasonable public official could have made it.
In the end, the whole trial came down to this one question—could Minister Hawke's decision pass the Wednesbury test? The answer was sought in the explanation offered in the Minister’s decision, which stated that Djoković’s ongoing presence in Australia may lead to an increase in anti-vaccination sentiment generated in the Australian community, and that therefore approving his visa was not in the public interest. On the other hand, Djoković's legal team argued that the minister cited no evidence that supported his claim, calling his act “illogical, irrational, [and] unreasonable approach to… the question of public interest” and his own exercise of ministerial discretion. In addition, they argued rgued the minister’s characterisation that Djokovic held anti-vaccination views was unjustified, based on selectively edited historical comments in the media, and which had been repudiated by subsequent public statements that he was “not against vaccination”. Hence, the decision did not pass the Wednesbury test. Furthermore, over 90 percent of the Australian population was properly vaccinated at the time, so the potential of Djoković’s presence contributing to the anti-vaccination movement was, from the very beginning, very low. Unfortunately, the Federal Court of Australia did not agree with this line of reasoning, since in their opinion, the Minister's decision passed the Wednesbury test, i.e. it was reasonable.

What remains to be answered, however, is why the Federal Court refrained from assessing the legality of the motives and examining whether there was an abuse of discretionary powers. This judicial hold-back is even more controversial if we take into account that internal political and party pre-election were just around the corner, and that political motives may have been behind such persistent administrative maltreatment of Novak Djoković. Also, the range of motives could include old stereotypes against the Serbian nation, but the chance for the court to include this possibility in the examination of the legality of the motives was equal to the chances of Rafael Nadal leaving the tournament after the deportation of Novak Djokovic, as a gesture of solidarity and sportsmanship. In conclusion, there was no chance at all for that to happen.

Returning to the previously used tennis analogy, so many tennis balls were thrown at Djoković, that it was too much to expect that he would manage to return them all. What the Djoković saga leaves unaddressed is whether the Australian government has passed, in addition to the Wednesbury test, the test of democracy. The answers that will ensue will affect not only further development of epidemiological policies, but also the outcome of the ongoing process of strengthening executive powers anywhere in the world. This process—a very dangerous one for the fragile values of a democratic society—was only made more visible and accelerated by the pandemic. Unfortunately, Novak Djokovic felt all its destructive power. For the rest of us, the Djoković case remains a vivid example of the importance of dealing with this paramount legal issue.