Home > Publications > Young Contributors > Changing the World as We Know It: The role of Industry 4.0 in Achieving Sustainable Development Goal 9 and the 2030 Agenda

Changing the World as We Know It: The role of Industry 4.0 in Achieving Sustainable Development Goal 9 and the 2030 Agenda 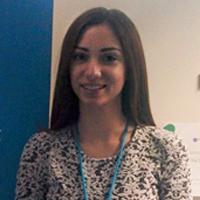 The world we know is rapidly changing, creating new opportunities and bringing along new issues that require attention. We live in a very complex era with change and progress happening daily, and how we choose to act today will be a cornerstone of the planet that future generations will inherit from us. In order to address the situation we find ourselves in, the United Nations has endeavored to set adequate goals for the near future.

At the September 2015 Sustainable Development Summit in New York, Millennium Development Goals were succeeded by 17 Sustainable Development Goals (SDGs) within the framework of the 2030 Agenda. The main aim of the Agenda and the SDGs is to provide people with guidelines on how to confront challenges the world is facing nowadays. It represents a comprehensive call for action to alleviate poverty, combat climate change, reach environmental sustainability, and secure healthy and peaceful lives for all people in the world. 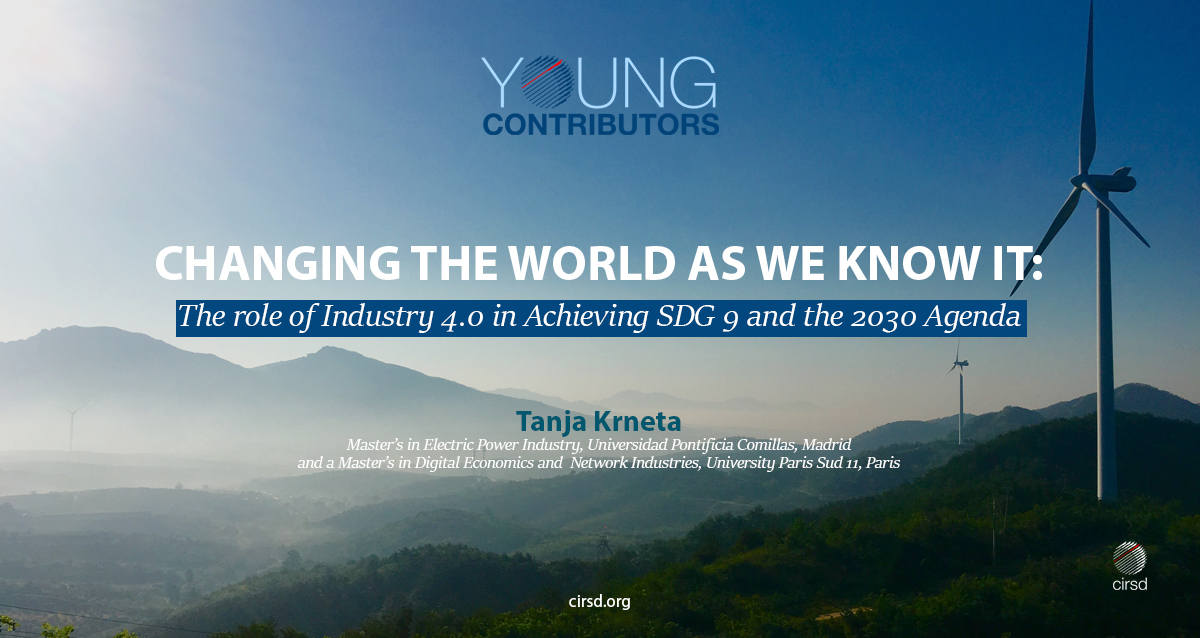 With the 2030 Agenda, we for the first time have a document whose focus is on addressing the roots of the problem rather than eliminating the symptoms that arose from them. Some of the areas that the SDGs cover are new when compared to those of the MDGs, such as innovation, climate change, peace, justice, and economic inequality. Moreover, the new 17 goals (also known as Global Goals) are applicable in emerging and developing countries as well as in industrialized ones. The main feature of the Global Goals is their interconnectivity. Frequently, successfully achieving one goal implies dealing with issues pertaining to another goal. In order to meet the targets set out by the SDGs and maintain our planet livable for future generations, there is a need for joint action of governments, the private sector, and society as a whole.

Within this bundle of goals, SDG 9 focuses on promoting inclusive and sustainable industrialization, building resilient infrastructure, and fostering innovation. These three aspects are the central drivers of a country’s development and growth. Individually, industrialization facilitates economic growth, creates jobs, and increases income. On the other hand, infrastructure provides essential connections for society and business, while innovation leads to environmentally sound industrialization. In the contemporary world, in which a majority of people live in cities, transportation is becoming increasingly important, the flow of electricity is becoming more complex and information and communication technologies (ICTs) are at the center of everyone’s attention, it is clear that the nexus of industrialization, infrastructure, and innovation are the foundation of our time.

In a time in which most of us have a feeling that having an Internet connection is a commodity, more than a half of world’s population (more than four billion people) still lacks access to the Internet. As expected, 90 percent of people without an internet connection live in developing countries. In order to ensure the equality of making knowledge and information available, it is crucial to bridge this digital gap. At the same time, around 2.5 billion people in the world lack full access to electricity and about 800 million lack access to water. Even though mobile phone services are spreading quickly, allowing people to be included in the universal information network, this twenty-first-century phenomenon still has not reached the point of universal utilization. This is a proof that a massive share of rural areas remains in many ways disconnected, and that this issue should be addressed in the near future.

Furthermore, sustainable industrial development ameliorates generation of income, for it is a primary source of a country’s economic engine. This further improves the living standards of inhabitants and leads to environmentally sound development. It is important to highlight the fact that without technological progress and innovation, industrialization can’t occur and that without it, a country’s development is not possible.

Over the last two and a half centuries, certain revolutions have been changing the world as we know it. The first wave of innovation systematically changed our lives with the invention of the steam engine and the commencement of industrialization. The second one had brought us mass production and electricity, creating new economic and social prospects. The third wave of innovation had moved us from analogue to digital technology, leaving us in the “information age.”

Nowadays, although many of us are still unaware of it, we are in the early stage of the fourth industrial revolution (industry 4.0)—the time of automation.

The technological progress brought to us by industry 4.0, has a key role in fighting present environmental challenges, providing us with long-lasting solutions. Such progress is based on energy efficiency and the preservation of natural resources. At the same time, it creates new jobs. The fourth industrial revolution brings along a pack of technological drivers of change that are creating prosperity.

With the emergence of industry 4.0, two schools of thought have occurred: those who see a huge incoming labor substitution and subsequent job displacement, and those who expect unlimited opportunities and new job categories. Who will end up being right will depend on governments’ actions in the time ahead. In order to avoid increased inequality and unemployment in the future, smart and planned actions should be undertaken by governments today in order to establish a workforce that will possess the required skills for a changed world. Smart investments in research and development, as well as innovative ideas represent a path to achieving the goal of having a workforce that will be ready for the challenges of the future.

We are living the inception of digital transformation of life, one in which the world as we know it is rapidly changing. Everything from science and healthcare to manufacturing and education is affected by the change brought by the fourth industrial revolution—the revolution that is bringing together physical, digital, and biological systems. The so-called “Smart Factory” brings new possibilities with emerging technological breakthroughs in various fields, such as robotics, artificial intelligence, 3D printing, electric vehicles, energy storage, nanotechnology etc.

Moreover, digital commerce is replacing physical movement of goods, shifting us towards more efficient and higher quality processes. Meanwhile, the need for workforce with technical skills is intensifying. Traditional boundaries are being blurred but new opportunities are being created. What we need to achieve the goals set forth by the 2030 Agenda, and SDG 9 in particular, is communication between different disciplines. This is where the phenomenon of Circular Economy comes in. Until today the take-make-dispose model was hauling our industrial growth, but this model has proved to be wasteful consumer of resources. The new model is emerging, called the Circular Economy. It is based on the segregation of resource consumption from economic growth and implies effective, renewable flow of natural resources, information, labor, and energy. It is common to identify Circular Economy with recycling, although this model goes far beyond recycling. The fusion of technologies in Industry 4.0 is the key to realizing the Circular Economy. In addition, governments will have important roles to scale it up on an international level. While some of the countries, mainly developed ones, have already started to act on this matter, a majority remains far away from adopting this concept. One can say that the European Union is the current leader when it comes to the implementation and promotion of this concept.

A massive potential for industrialization exists in the least developed countries, especially in the agro and textile industries. Bearing in mind that almost 98 percent of agricultural production in high-income countries is being processed, there lies a huge opportunity for agroindustry in least developed countries. Currently, these countries contribute less than one percent to the total global manufacturing value, even though they make up 13 percent of the world’s population. It is in the best interest of those countries to exploit the benefits of the new industrial revolution and use them to initiate a late beginning of their industrialization.

Economies around the globe should be aware of potential opportunities and threats at stake. Everyone has a chance to be the pioneer of the new age by intelligently exploiting current levels of technical development. It is just a matter of timing. The first ones to realize the importance of sustainable development and green economy will be the leaders of the upcoming era. As for those who stay behind and wait for the consequences of the ways in which we have been conducting ourselves for the past few centuries to occur, it will be too late to react. Today also happens to be the critical moment to take action and prevent further impact of climate change. Industry 4.0 is giving us the tools to mitigate greenhouse gas emissions, as well as address water scarcity, bridge the deficit of electrification and network services. An important link in the chain is the engagement of governments. They should be dedicated to the creation of proper regulation and policies, intergovernmental cooperation and inclusion of civil society. In the following years we will see just how prepared the world is for the fourth industrial revolution. It is very difficult to keep up with such a borderless prosperity. It prompts us to be creative and innovative enough to survive the twenty-first century.

The world has changed and we cannot go back to the times of yesterday. The revolution is essentially changing our way of living and working and emphasizes the need for collaborative action for dealing with complex issues. Technological progress of Industry 4.0 can turn out to be the best or the worst thing that happened to our civilization, and that depends on how we act today. If a majority becomes aware of seriousness of side effects that our way of life has caused in the last few centuries, if the majority realizes that immediate action coupled with international cooperation is needed, the benefits of the fourth industrial revolution will bring us to environmentally sound, healthy, and peaceful future.