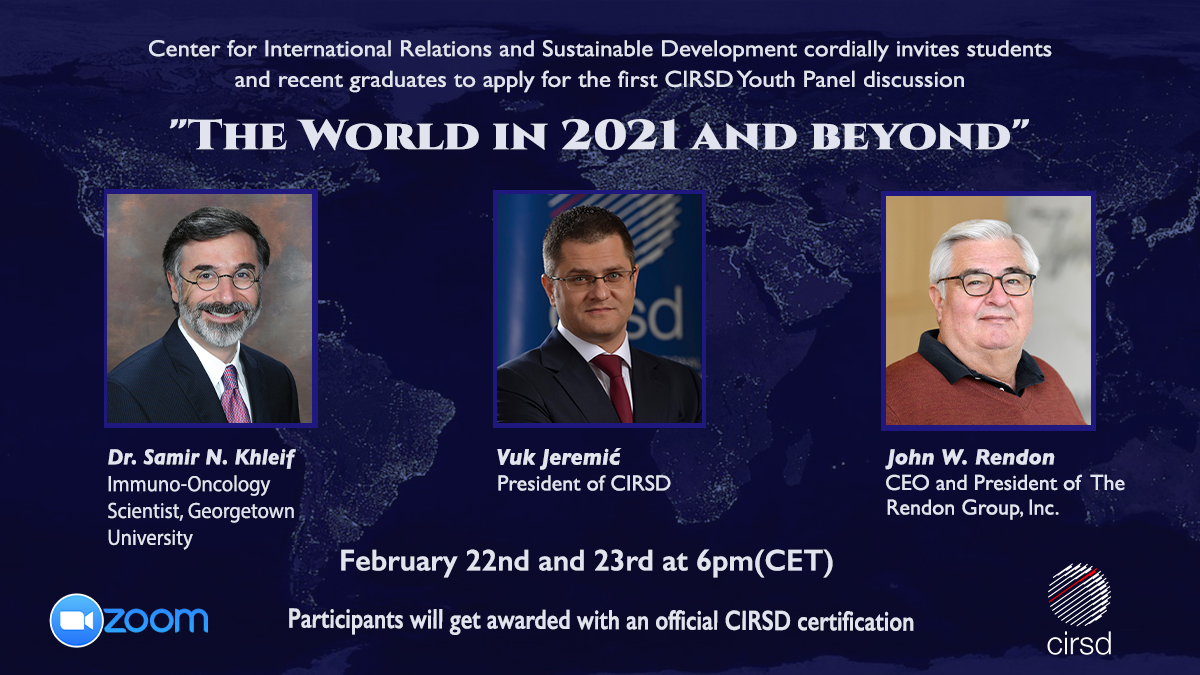 CIRSD is pleased to announce the registration process for our first youth panel “The World in 2021 and Beyond”, which is to be held online on February 22nd and 23rd at 6PM (CET). Discussions will give new insights into the growing challenges in our globalized world. The spots are limited and we urge students of all universities to apply either by sending us a resume at [email protected] or by filling out an application form at the following link: https://forms.gle/JPQ28yWk7kxADi6F9.

Participants are required to have a high level of English proficiency.

Dr. Samir N. Khleif is a world renowned scientist, researcher, and a pioneer in the field of immuno-oncology. He currently serves as a director of the Loop Immuno-Oncology Research Laboratory at the Lombardi Cancer Center with interests in developing novel cancer vaccines. Through his years of experience at the National Cancer Institute (NCI), Dr. Khleif served as a chief of the Cancer Vaccine Section, leading a national Immunotherapy Program where he was in charge of conduction of the clinical trials in antigen vaccines. Dr. Khleif is currently using his extraordinary medical experience to raise awareness about challenges regarding COVID-19 and vaccination. His lifelong experience includes directing the development of national strategies and strategic programs along with clinical health care systems at institutions in the US and internationally.

John W. Rendon is CEO and President of The Rendon Group, Inc., a global strategic communication consultancy that worked in more than 100 countries. Mr. Rendon has served as Executive Director and Political Director of the Democratic Party of the United States and has worked and led numerous of its campaigns. Being considered as one of the worlds’ leading pioneers in the use of strategic communications as an element of national power, Mr. Rendon also served as an executive communications consultant to the White House, U.S. Department of Defence and the National Security community. John Rendon lectures on topics including Global Power shifts, Leadership in the Knowledge Age, strategic communications development, tactics and operations, and the American Presidency.

The Panel will be moderated by Vuk Jeremić, the President of the Center for International Relations and Sustainable Development and leader of Serbia's oposition People's Party. In June 2012, he was directly elected by the majority of world’s nations to be the President of the 67th session of the UN General Assembly. During his term in office, he played a leading role in steering the UN towards the establishment of the post-2015 Sustainable Development Agenda. As the President he also facilitated the adoption of the breakthrough Arms Trade Treaty. In 2016, Mr. Jeremić participated in the official election for UN Secretary-General. He served as Minister of Foreign Affairs of the Republic of Serbia (2007-2012). Named a Young Global Leader by the World Economic Forum in 2013, and appointed to the Leadership Council of the UN Sustainable Development Solutions Network (SDSN) in 2014.