Home > News > “The International Court of Justice is not international, it’s not a court and it doesn’t do justice.” Alan Dershowitz

“The International Court of Justice is not international, it’s not a court and it doesn’t do justice.” Alan Dershowitz

The Center for International Relations and Sustainable Development hosted Alan Dershowitz, one of the world’s most famous criminal-defense lawyers, who is an expert in constitutional law and civil liberties and is among the greatest American legal authorities of our time. Mr. Dershowitz had a discussion with the president of CIRSD, Vuk Jeremic, on many global topics such as: the roles of the International Criminal Court and International Court of Justice in the modern world, the Palestinian-Israeli conflict and how to resolve it, Donald Trump’s impeachment (in which Dershowitz served as his defense attorney), along with an interesting discussion about his successful career in law and the difficulties that Serbia has been facing in the past from his perspective. 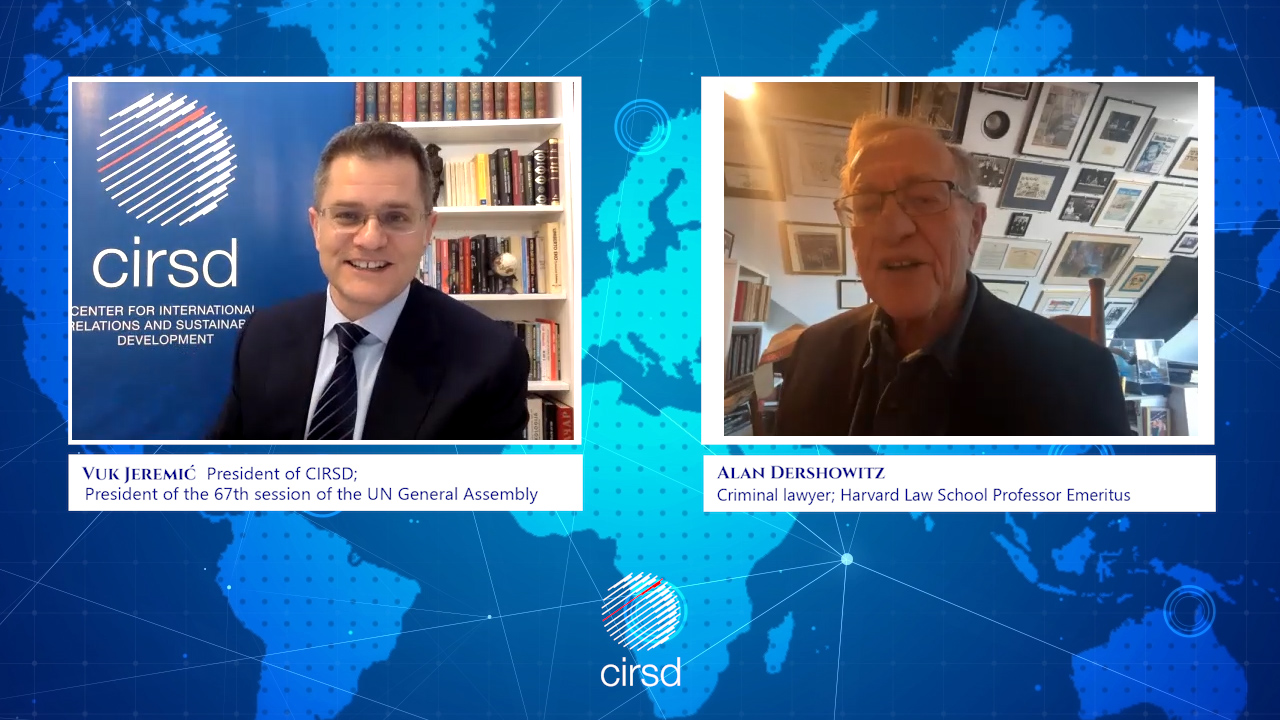 Alan Dershowitz, Harvard Law School’s eminent professor emeritus, and a reputable American lawyer, referred to the International Court of Justice and stated that “It’s not international, it’s not a court and it doesn’t do justice.”
“I don’t think that ICJ deserves to be called a court, it is really a group of diplomats wearing robes to protect them from the usual criticism that diplomats get. Judges in there are selected by their countries and often the decisions are made in the country’s capitals, not in the halls of the ICJ. They have rendered some terrible decisions,” stated Dershowitz in this Zoom discussion, “The Case for Justice,” which was organized by CIRSD in cooperation with the Faculty of Law – University of Nis.
Mr. Jeremic said that the decision in which ICJ referred to the Srebrenica massacre as genocide is one of the most controversial and that in Serbia there is vicious debate on the topic, and with legitimate reason.
“In Serbia we have very strong views on genocide, having being victims of genocide in the WWII by the Croatian puppet fascist state at that time, so we are very sensitive when it comes to the usage of the word genocide,” stated Jeremic.
Alan Dershowitz said that the “International Court of Justice does not have special competence to make a declaration of that kind that is in any way binding,” referring to the ICJ’s efforts to declare a massacre in Srebrenica a genocide.
“I think that historians should continue to debate on what happened in the horrible events in Srebrenica and let historians make the decision about what the proper classification is and let different historians come to the different conclusions,” stated Dershowitz.
Vuk Jeremic mentioned that during his time as President of the UN General Assembly in 2012, he started a debate on the role of international criminal justice in reconciliation between the people and described this event as being very controversial among the UN diplomats at the time.
“All hell broke loose. I was pressured like there’s no tomorrow. First and foremost, the United States really wanted me to drop the discussion, but I didn’t. So we ended up discussing the ICC and the Hague Tribunal for the former Yugoslavia and discussing ICJ in general. A lot of people decided to boycott this, for example the president of the ICC did not come to this discussion, despite the fact that this ended up being the biggest debate in the history of the UN in terms of the number of participants,” said Jeremic.

Dershowitz took a moment to express his admiration and respect towards the Serbian people by saying that, “Serbia is a great country with a great history. Serbians were heroes in WWII, they fought hard against Nazism. I am a big fan of the Serbian people and how they dealt with their history, both under fascism and communism. Nobody can say anything negative to me about Serbia. I have a different view about Croatia.”
Referring to Dershowitz’s recent defense of Donald Trump during his first impeachment trial, Jeremic asked him the following “What does it take for a life-long liberal democrat to take up the defense of Donald Trump”?
“It’s really easy for liberal Democrat to defend a Republican president, all you have to do is love the constitution, human rights, and civil liberties more than you love partisan politics,” answered Dershowitz.
He added that “I put the constitution above partisan politics. My view is that President Trump was unconstitutionally impeached. The constitution only permits impeachment on four grounds: treason, bribery, or other high crimes and misdemeanors. He wasn’t charged with anything that fit those criteria.”
During the last segment of the discussion, Jeremic read some of the questions sent by our students, who participated in the event. One of them was about Edward Snowden asking, “Do you think Edward Snowden is a hero or a traitor and would you consider defending him”?
“I think he’s both a traitor and a hero. I would distinguish Edward Snowden from WikiLeaks and Julian Assange. Edward Snowden committed a crime, there’s no doubt about that. He stole information after committing himself to keep that information secret. So he is a criminal. He may have a moral justification which would turn him into a hero, but you can be both. Yes, I would defend him”.
Dershowitz ended with a high and inspiring note by saying the following: “There’s a book called ‘Rights from Wrongs’ where I promoted a theory of human rights called the secular theory of human rights, that you can’t understand where the human rights come from unless you see the wrongs that provoked the rights. Sometimes it’s not just the wrongs, it’s the events. But rights don’t go abstractly, they grow out of experience. Experience teaches us everything and requires us to adapt the law to changing circumstances.”