Home > News > Commemoration of the 75th anniversary of the UN

Commemoration of the 75th anniversary of the UN

At the invitation of Lawyers without Borders-University of Bristol division, the President of the Center for International Relations and Sustainable Development (CIRSD), Vuk Jeremic delivered a keynote speech at a webinar entitled “Commemoration of the 75th Anniversary of the UN” on December 4th, 2020. 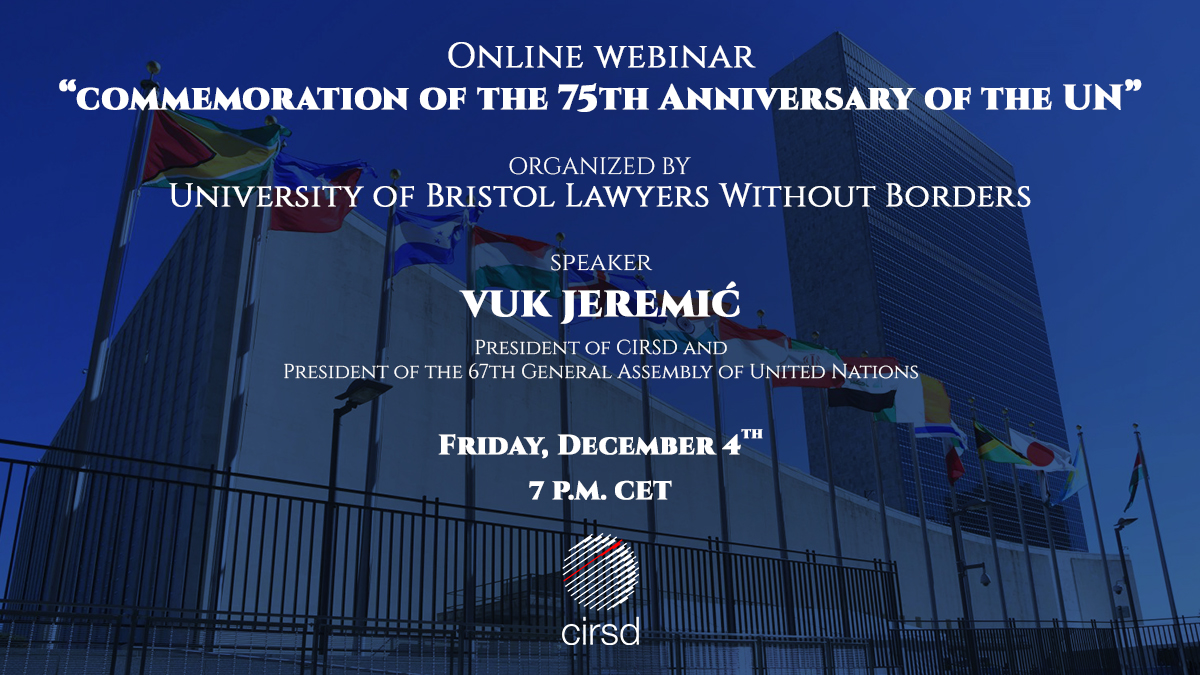 Jeremic addressed students of Bristol University, focusing his remarks on human rights issues in the modern world and how today’s geopolitical events might impact them even more than expected.

“We are going through a severe geopolitical recession right now, that hasn’t started with COVID, or with Donald Trump’s election, it actually started in the year 2008”, Jeremic said by giving an overall recap of the geopolitical and economical events that took place in the last decades. He noted that the world economy being so closely interlinked through globalization led to the spread of financial instability like a contagion, which called into question the assumption that it is always better to be more globalized.

Jeremic pointed out to the problem of corona virus vaccine dispensation which is likely to happen in the upcoming moths. He stated that the governments of the most developed countries in the world have already reserved almost the entire first contingent of vaccines against COVID-19, and that only a small quantity will remain available for developing countries, which could cause additional instability and furthermore deepen the global crisis.

“It is of great importance that the distribution of the vaccine is at least more or less equal. Unfortunately, “vaccination nationalism” is growing at the moment. The first vaccines will go to the United States, Great Britain, the EU, and Japan, followed by a relentless race,” Jeremic said.

He expressed his belief that the world has not yet experienced the most dramatic moments of the pandemic crisis, and that registration, allocation and distribution of the vaccine will be the most important global issues of the first quarter of 2021. “Similar situations in the past have led to revolutions” said Jeremic, adding that if there is any order in vaccine distribution, it will be established in the developed world.

Commenting on the impact of vaccine production companies, Jeremic stated that pharmaceutical corporations such as Pfizer and Moderna have no immediate plans for developing countries. While AstraZeneca said that it would not make a profit on the vaccine until the end of the pandemic, the other companies did not.

Jeremic concluded the speech in a relatively positive and motivational tone, by quoting Winston Churchill: “If you’re going through hell, keep going.”