Home > News > Martin Varsavsky: Use the time in isolation to gain new knowledge

Martin Varsavsky: Use the time in isolation to gain new knowledge

At the invitation of Vuk Jeremic, the President of the Center for International Relations and Sustainable Development (CIRSD), the guest of the “Corona Dialogues” series was Martin Varsavsky, a Spanish entrepreneur and investor, who currently leads a taskforce assisting the Madrid authorities fight the coronavirus pandemic. He called upon people in isolation to use the internet to gain new knowledge, especially in the field of digital technology, the industry of the future. 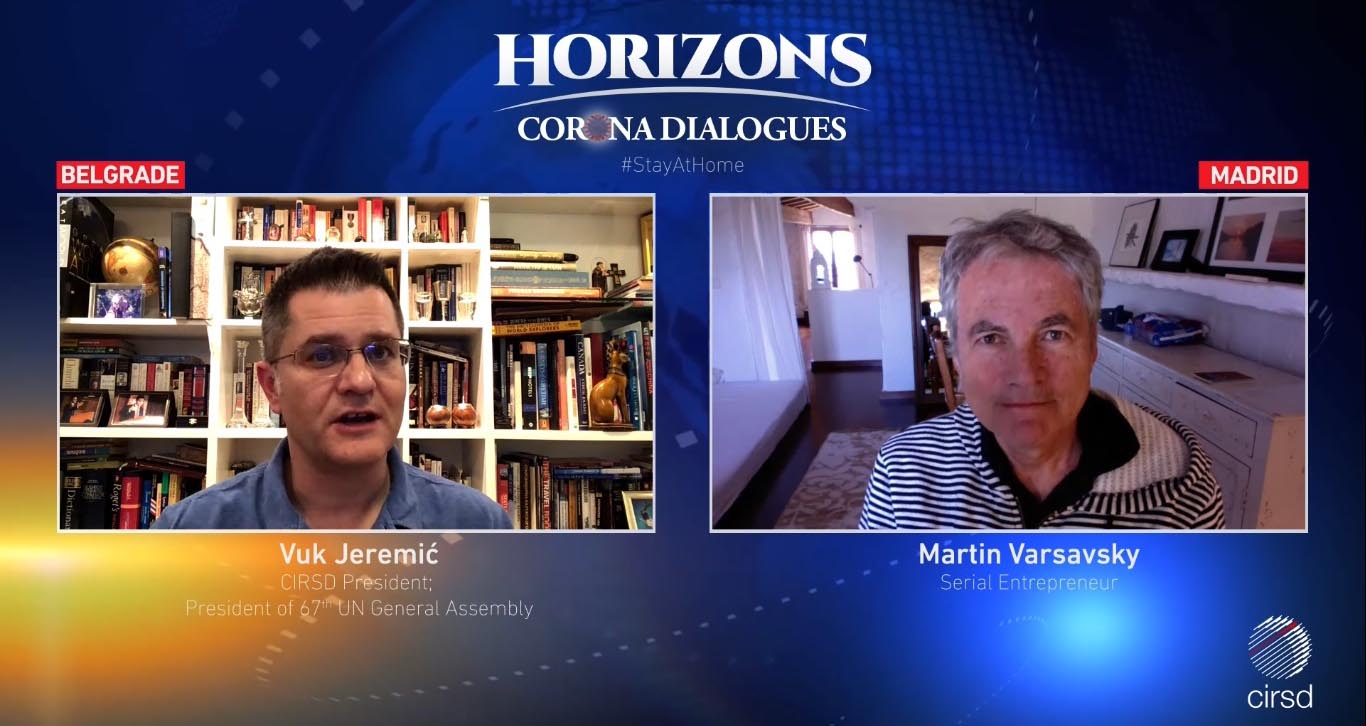 "Whenever it rained, it stopped. And it will stop raining this time too. This is not permanent, this is a temporary event. The crisis caused by the pandemic has had dire consequences, but it will pass like all before it, and a great pandemic is unlikely to recur soon, as humanity will learn how to defend itself more effectively. Use this time in isolation to educate yourself in digital technology, as jobs in this field will be much more in demand than they are now,” Varsavsky said in the interview with Jeremic.

An innovator, entrepreneur and billionaire, over the past 30 years Varsavsky has founded 10 companies in the fields of telecommunications, the internet, renewable energy, biotechnology and artificial intelligence. For the last several years, he has owned the largest chain of fertility clinics in the United States.

He pointed out that now is the time of digital companies, which have remained fairly secure at the time of the pandemic.

"People spend their life on Netflix right now, and I don't see how Amazon and Microsoft could be affected by this crisis. The digital world is protected, but on the other hand, my hospitals dealing with artificial insemination have a great deal of difficulty because we have to pay salaries and we have no patients. Companies that need customer presence, such as hotels, restaurants, travel, tourism... Those industries are being decimated”, Varsavsky said.

Varsavsky’s team is made up of the leaders of six major Spanish companies, and is tasked with helping the authorities in Madrid determine the number of people infected with the coronavirus through digital means.

Jeremic said that the world economy was in the doldrums and that the governments of developed countries, especially the United States, decided to "bazooka hit” the problem. “Huge amounts of money are being thrown at the market”, he noted, citing the 2 trillion U.S. dollars stimulus as an example, “while the real economy continues to go down because things are not being produced.”

Varsavsky replied that in an environment where no one works and everyone pays their bills, money can continue to be borrowed only as long as interest rates are zero or negative. This however cannot last indefinitely and the interest rates will eventually rise, because people who lend the money will become worried that they will never get their money back.

"Governments will not be able to pay people to do nothing for a long period of time, and there is no need for that. Those under 40 have very little to fear about the coronavirus, and if they live in a country where the medical care system is not saturated the chances of dying are almost zero”, Varsavsky said. He added that an entire portion of the workforce could go back to work, naming a few countries where this is likely to happen soon: Italy has announced reopening companies after Easter, Spain will do something similar, and, following Sweden’s example, Denmark and Norway have announced that they will reopen their primary schools.

Jeremic said that authoritarian rulers would not easily give up the new means of population control established during the pandemic, as these will assist them in further strengthening their authoritarian rule.

Varsavsky stated that people who lead democratic countries and who are true democrats are mostly trying to do what they believe the citizens want to make their countries a better place to live.

"I don't think such leaders are overly interested in spying on people. I don't even think that my friends, owners of Google and Facebook, spend their time watching people's private lives, even though Google and Facebook know a lot about people—I think they are mostly trying to sell ads”, Varsavsky said.

He added, however, that in countries like Spain, France and Germany, the question is why would citizens trust companies like Google—which know everything about them—more than their own governments trying to save people's lives?

CIRSD has launched the "Corona Dialogues" series in which Jeremic talks with world-renowned experts in different fields in order to better understand the coronavirus pandemic and the consequences it will cause globally.