On 10 June 2018, CIRSD President Vuk Jeremic gave the commencement address at the prestigious Italian Diplomatic Academy in front of an audience of thousands in the Verona Arena, one of Italy’s most spectacular Roman amphitheaters. 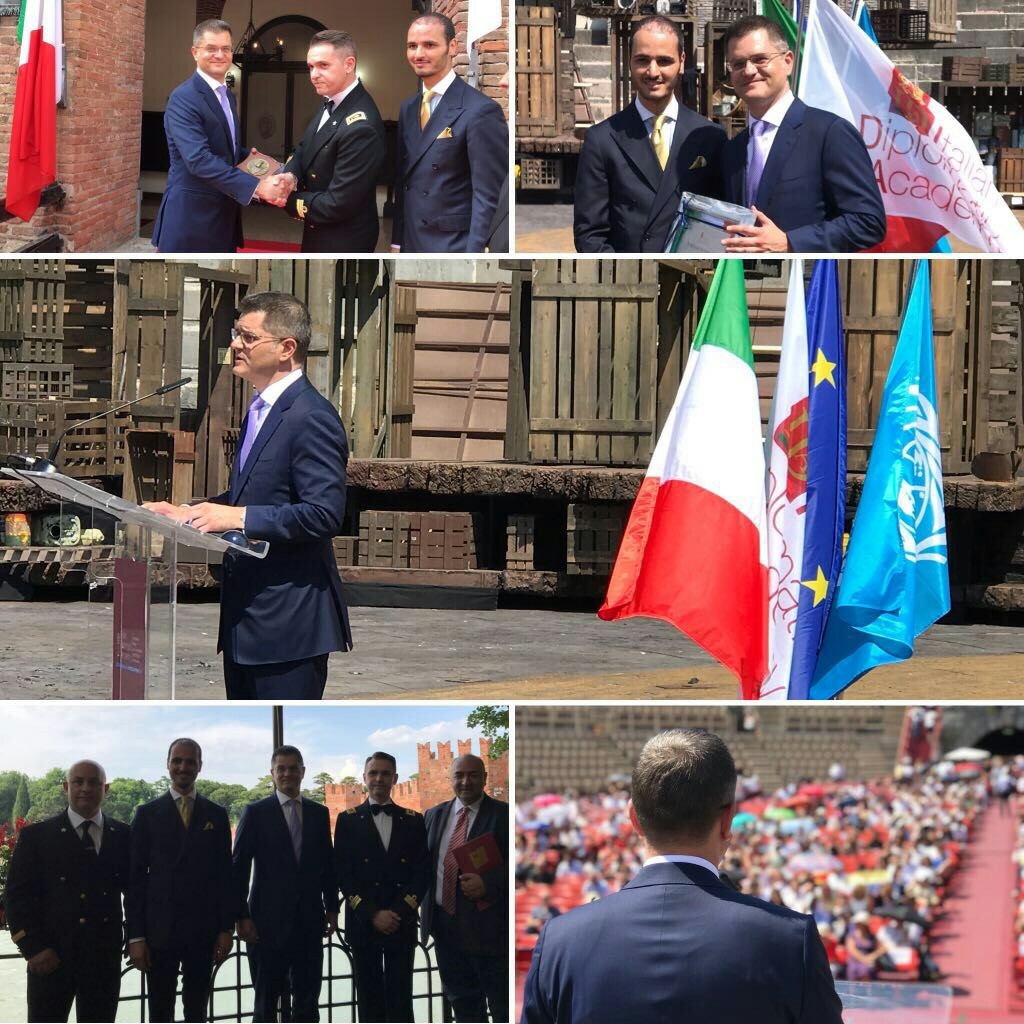 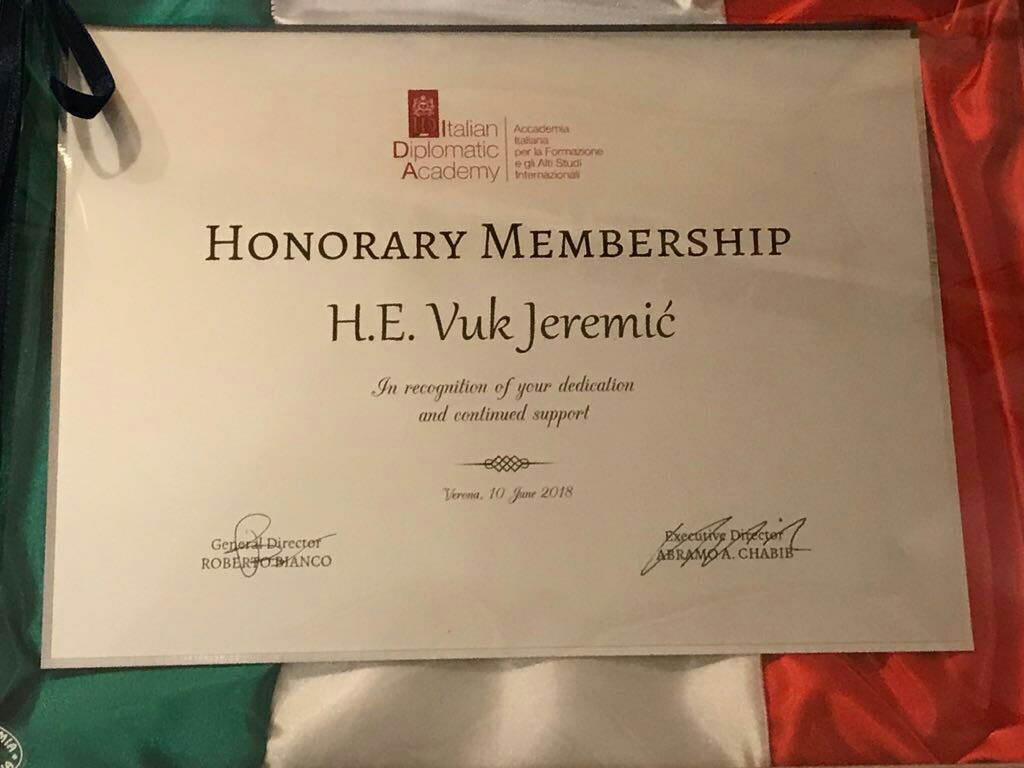 Text of the address:

Excellencies,
Esteemed Professors and Graduates, Ladies and Gentlemen, I  am  truly  humbled  by  the  privilege  to  yet  again  address  such  a  distinguished gathering of young leaders in this spectacular setting. Allow me to begin by offering my most sincere congratulations to the graduates of the Italian Diplomatic Academy.

The mission of this institution has been to teach you how to engage with the world of tomorrow—not simply  by  helping  you  understand  global  developments,  but  also inspiring you to try to shape them yourselves.

A world-class faculty has guided you on a great journey of academic discovery. They introduced you to the nobility of public service and the quest for the greater good— that of your country, and the rest of humanity.

Ladies and Gentlemen,
The education of diplomats goes back centuries. A famous Florentine thinker remains known for strongly cautioning them against the temptation to dream of power one’s side doesn’t have and can’t acquire.

He  called  this  “the  way  to  the  abyss,”  and,  drawing  upon  contemporary  examples, instructed his readers in the art of “steer[ing] clear of it.”

The  emergence  of  successive  European  orders  owes  much  to  the  hard  work  and imagination of generations of diplomats. History reminds us of the accomplishments of the treaties of Westphalia, Vienna, Berlin, and Rome. Each time the fighting ended, peace went on to be sustained on the basis of negotiated principles of legitimacy.

Sometimes, the diplomats begin their work whilst the war still ranges on. So in late 1943, representatives  of  the  four  principal  allied  powers  met  in  Moscow  to  set  the broad parameters for what was at first called a “general international organization.” Less than a year later, they reconvened in Washington to continue their work. And less than a year after that, they were joined in California by 46 other allied delegations to hammer out the United Nations Charter.

In  his  address  to  the  final  session  of  the  San  Francisco  Conference,  the  American president, Harry S. Truman, called the Organization that had just been established a “[most] solid structure upon which we can build a better world.”

And indeed they have. Ladies and Gentlemen,
Despite  much  turmoil  and  strife  in  the  intervening  decades,  global  peace  has  been kept, and humanity has grown more prosperous. Subjugated nations have won their liberty;  the universality  of  human  rights  has  been  enshrined  into  laws;  and  billions have been lifted out of poverty.

There is no doubt that the world is a much better place today because of the United Nations.

In  the  words  of  the  second  President  of  the  General  Assembly,  Brazil’s  Oswaldo Aranha, the United Nations “is not merely a political organization. It is not a simple covenant between nations, but an undertaking in human thought and sentiment. From here,” he concluded, “emanates [...] a faith that the peoples of the earth may learn to know and trust each other in the full understanding of a common destiny.”

Ladies and Gentlemen,
It is an impressive feat of history that this multilateral framework is still honored by most governments most of the time. More than 70 years since it was established, the UN continues to inspire humanity and call the world to action. Almost to this day six years   ago,  I   was  elected   President   of   the   General   Assembly.   My   proudest achievement  was  launching the  historic  diplomatic  negotiations  that  led  to  the establishment of the UN 2030 Agenda for Sustainable Development.

This  bold  and  universal  covenant  for  global  solidarity  was  designed  to  eliminate extreme poverty, ensure widespread economic growth, reduce inequality within and between states, and protect the planet from environmental degradation.

There  is  much  road  to  travel  in  the  implementation  of  the  SDGs.  It  is  perhaps  the hardest task humanity has ever set for itself. Only the convening power of the United Nations could have gotten us this far. And as the sole institution of our times where all  sovereign  states  come  together  to  meet  on  equal  ground,  the  UN  is  the  only platform  from  which  we  can  hope  to  bring  about  sustainable  development  to  all corners of the world.

Just  like  everything  else  that  has  ever  been  crafted  by  human  beings,  the  United Nations  is  an  imperfect  creation.  So  it  should  come  as  no  great  surprise  that  this global safety net has become brittle with age.

It  is  difficult  to  point  to  any  single  cause  that  has  led  to  its  attrition.  A  cumulative train of events over the past few decades has produced a divergence in the approaches of major powers towards a growing list of geopolitical challenges. This has limited the number of issues that may be efficiently addressed through high-level diplomacy.

My   good   friend   Ian   Bremmer—one   of   today’s   most   influential   thinkers   on international relations—describes the world we’re living in as a G-Zero World: one in which no
single country or durable alliance proffers a coherent set of ideas or policies that amount to a credible claim to global leadership.

Of course, diplomats still meet with each other on a regular basis. But their discourse has increasingly  become  transactional.  There  seems  to  be  less  and  less  room  to persuade one another, or reason together. It’s almost as if they’ve lost the ability to speak  a  common language.  Old  rules  have  lost  their  edge,  and  new  ones  have  not come in their stead.

We thus find ourselves in an interregnum—in what Henry Kissinger terms a “period of upheaval”—in which “the old order is in flux while the shape of the replacement is highly uncertain.”

Our planet is overheating, and the science confirms it: global warming has hit an all- time peak; so have carbon dioxide emissions. We are in the hottest period on record. I’m  not  the  first,  and  certainly  not  the  most  competent,  person  to  say  this,  but  I’m afraid we might be losing the war on climate change.

Meanwhile,  wars  of  a  more  conventional  sort  are  spreading:  the  number  of  violent conflicts is ascending sharply. Right now, they’re taking place in over 130 states— that’s nearly 70 percent of the world’s countries.

It’s  a  shockingly  long  list—one  that  unavoidably  begins  with  those  that  make  the headlines on a regular basis, like Syria and Yemen. But let’s not forget the drug wars of Mexico and the Philippines; the continuing slaughter in Darfur and South Sudan; the  plight  of  the Rohingya;  and  the  fact  that  there  are  at  least  six  distinct  major insurgencies taking place in the Democratic Republic of Congo as we speak.

On opposite sides of Asia, world powers have chosen to deal with the vital issue of nuclear weapons  in  profoundly  different  ways—in  each  case,  the  outcome  remains wholly uncertain.

There are so many reasons to be worried about where the world is going. If I haven’t convinced you so far, then let me put forward the final argument: Italy’s not playing in the World Cup!

This is not a rhetorical question. It’s the reality for most of us here. And it’s not going to go away so easily.

My answer is “don’t stop believing.”

Don’t think for a second that you’re too weak or insignificant to be an effective agent of betterment,  and  don’t  be  tempted  to  hope  that  positive  change  will  come  on  its own.

If shaping tomorrow is something you care about, then you need to become engaged in the shortest possible order.

And when in doing so you hit an obstacle—and trust me, you will, more often than you  can imagine—don’t  be  dismayed.  Don’t  drop  the  ball,  and  turn  away.  A  great world  leader famously  said,  “if  you’re  going  through  Hell,  keep  going.”  That  is  a grand lesson in character and perseverance.

Some may well advise you—possibly with the best intentions—to do the opposite. To stay in your zone of comfort and let others make decisions for you. But for people with diplomas of the Italian Diplomatic Academy in hand, I don’t believe that should be an option.

Others may tell you to focus narrowly on getting your own house in order—your city or your nation, for instance. This is entirely legitimate advice, for we naturally care most about our own community. But in this time of global change, I’m afraid that’s just not enough. What happens beyond our particular jurisdiction or border affects us as just much as what happens at home. Don’t fall for the illusion that limiting your scope will somehow inoculate you against global perils.

When I said “don’t stop believing in the world you want to see,” I didn’t mean you should dismiss or reject the experience of others. You mustn’t become a prisoner of your own ways. Resist thinking that you’re always in the right, or the urge to look down upon those who disagree with you. Soak up their views  and  absorb  their knowledge,  so  that  you  may  improve  your  own  bearings. Listen to what others have to say, and be ready to reciprocate; try to understand what leads them to think differently from you.

At bottom, that’s what your chosen profession is about. And remember: when you’re a  diplomat—even  when  you’re  just  starting  out—the  work  you  do  can  make  a disproportionate amount of difference.

“Solitary,  poor,  nasty,  brutish,  and  short.”  Thomas  Hobbes  used  just  five  words  to describe what life was like in his allegory of state of nature—devoid of rules held in common; with no sense of right and wrong, justice and injustice—with only “force and fraud” to rely upon.

The state of nature is where we begin to revert back when our institutions start failing due to mismanagement or the lack of maintenance.

But  disregarding  our  stewardship  over  them  would  constitute  a  most  dangerous exercise  in  self-defeat—for  institutions  are  what  stands  between  us  and  barbarism. They are the bulwark against chaos and the stronghold against appetites unrestrained.

When  they  are  no  longer  in  optimal  condition,  the  answer  lies  not  in  wholescale abandonment or demolition.

It’s  infinitely  easier  to  destroy;  than  to  rebuild.  So  you  have  to  be  careful  in  the choices you make and the actions you pursue.

Do not strike in anger and frustration at the entire edifice because some part of the construction has ceased to perform.

I came across a good piece of advice the other day: if your house gets flooded, don’t cancel your fire insurance.

Reform requires prudence and judgment, so you can decide to perpetuate what’s good and healthy, and fix what’s not.

If  you  get  it  wrong,  try  again.  Don’t  stop  believing  and  don’t  stop  acting  with  the courage of your convictions. Because if you succumb to despondency—if you throw up your hands in the air—then you’ll just be making your “way to the abyss,” instead of “steer[ing] clear of it.”

In  so  doing,  you  will  involve  yourself  in  the  honorable  quest  to  transform  those notorious  five  Hobbesian  words  into  their  noble  opposites:  to  move  away  from  the force and fraud of “solitary, poor, nasty, brutish, and short,” towards the concert and reason of “shared, flourishing, good, civilized, and enduring”—the definition of what governance needs to be about in a world that is worth to believe in.

Thank you for your attention.

For the text of the address, please click here.