The Center for International Relations and Sustainable Development (CIRSD) launched the Serbian edition of the latest book by Professor David M. Lampton, entitled Following the Leader: Ruling China From Deng Xiaoping to Xi Jinping. The book is based on Lampton’s 558 conversations with Chinese policymakers. 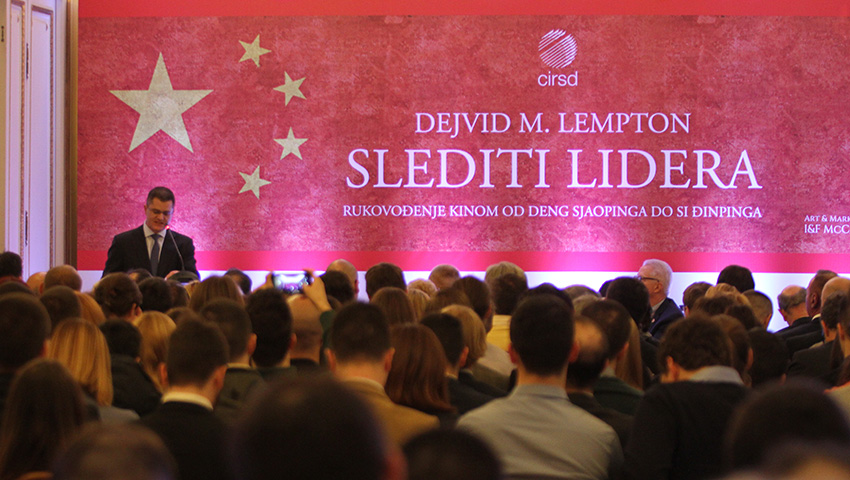 Lampton is Director of China Studies at the Johns Hopkins School of Advanced International Studies, and one of the world’s leading experts on China. Professor Lampton is deemed the best scholar on China by Chinese political scientists themselves, at least according to recent China Foreign Affairs University research. In addition, Lampton holds an honorary Ph.D. in Far East Studies from the Russian Academy of Sciences.

Besides the author and CIRSD President Vuk Jeremić, the Belgrade launch featured remarks by the Dean of Belgrade University’s Faculty of Political Sciences, Dragan Simić, and a Research Associate of the Institute for Modern History of Serbia, Dr. Jovan Čavoški.

In his introductory remarks, Jeremić noted that it makes sense to talk about the “return of China” instead of the “rise of China,” as many studies and media reports would have you believe. He also said that China does not solely represent a state in its modern sense, but a civilization that has been around for thousands of years in many differing forms. Jeremić said that Lampton is “one of the very few people who has had extensive interaction with China’s top leaders more or less continuously since 1971,” and compared his experience with that of the former U.S. Secretary of State Henry Kissinger. 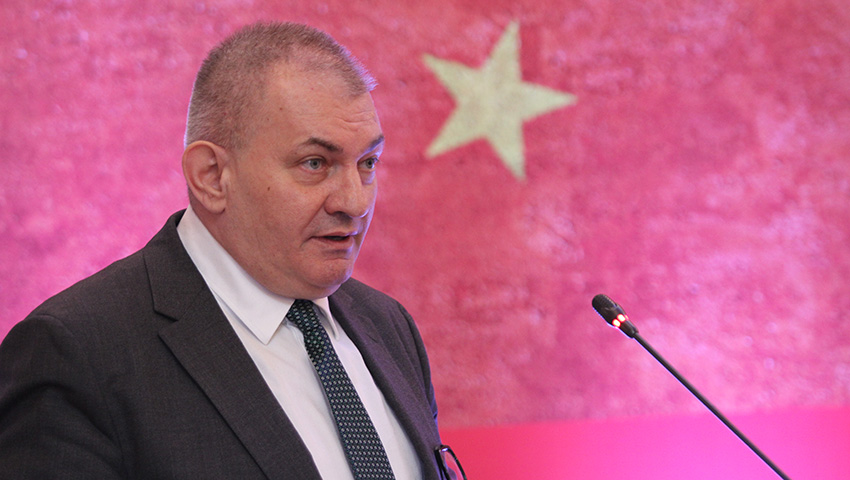 Professor Simić said that the book lays the groundwork for a comprehensive understanding of contemporary China and the country’s relations with the United States, then stating that Professor Lampton makes for the most acknowledged Western expert on Chinese modern history. 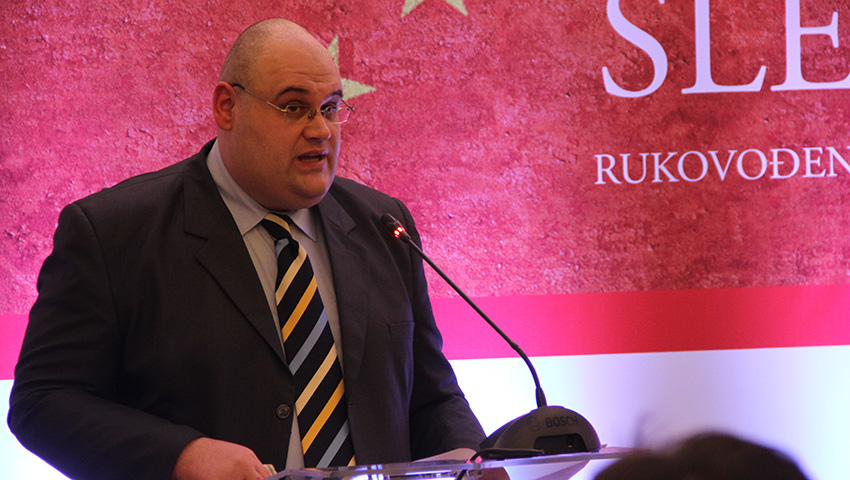 Dr. Čavoški praised the book for containing a large number of interviews with prominent Chinese figures, and for relying on the traditional methodology of researching societies by conducting analyses of their leaders.

Throughout the rest of the event, Jeremić and Lampton discussed the many specifics of the Chinese system, its structure, and the role of leaders in it. The two interlocutors highlighted Chinese meritocracy as something that is often overlooked by many “outsiders,” but is, however, evident in the respective structures of the Communist Party, the administration, and the military. The author praised the Chinese political system for its methodology in holding the highest record-keeping standards, managing the effective recruiting and training of cadres, and maintaining an excellent reputation in all sorts of international negotiations. 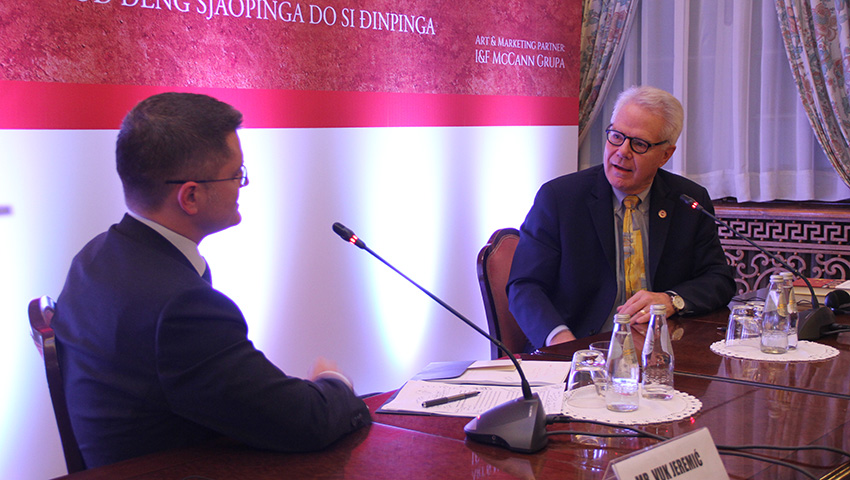 One of the main topics of the discussion included the state of the Chinese economy and the implications of the “new normal” for China and the world. Lampton expects the Chinese economy to frequently undergo turbulent phases, but also to keep the enviable growth rates that characterize it. “China is experiencing slower growth because of its positive systemic changes, not because of its mistakes,” Lampton underscored.

Part of the discussion was devoted to the role of China in a multipolar world.

Lamtpon said that China has acquired prominence in international relations much sooner than it expected, making the task of Xi Jinping, China’s current leader, much more complex than when compared to its predecessors.

Jeremić underlined the good ambition and intention behind the “One Belt, One Road” initiative, its global implications, and its relevance for Southeastern Europe. Professor Lampton explained the initiative as a concept of thousands of stand-alone investments put together in an attempt to link up Eurasia by land and sea, in which China stands at the forefront of all efforts.

A portion of the discussion revolved around the foundation of the Asia Infrastructure Investment Bank (AIIB). Jeremić noted that the AIIB is a part of today’s financial reality and asked Professor Lampton to explain America’s views on this project. Lampton responded that Asia faces a growing need for infrastructure financing, and referred to the U.S. decision not to participate in the initiative as a “missed opportunity” to advance cooperation between the world’s two largest economies.

“It is necessary to build systems that will include (not exclude) both the U.S. and China,” Lampton asserted. Jeremić also addressed the Russo-Chinese rapprochement caused in part by the “New Cold War,” as well as future relations between China and India.

“Both sitting and future U.S. and Chinese presidents have a historic duty to define relations so that they truly reflect interests of both sides in the long-term,” professor Lampton concluded. 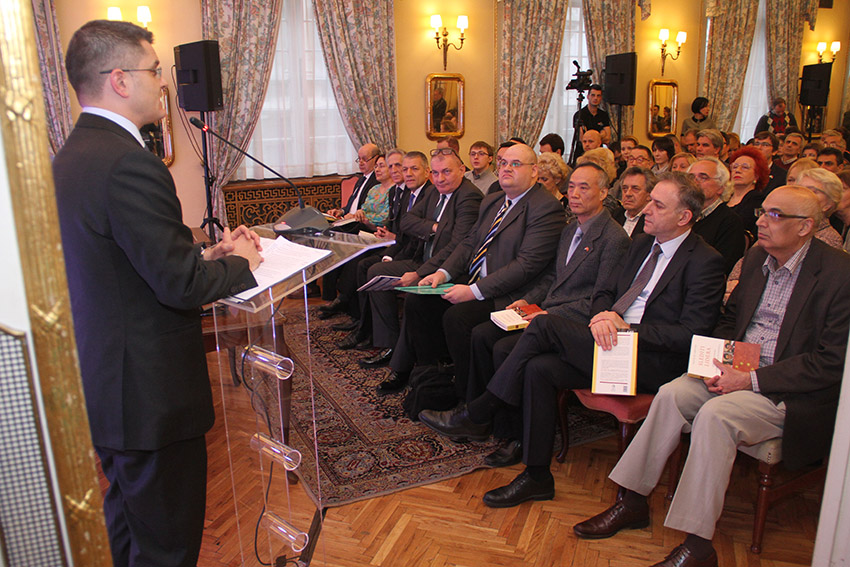 The book launch was attended by a number of diplomats, journalists, public figures, as well as professors and students from the University of Belgrade.

You can purchase book here.