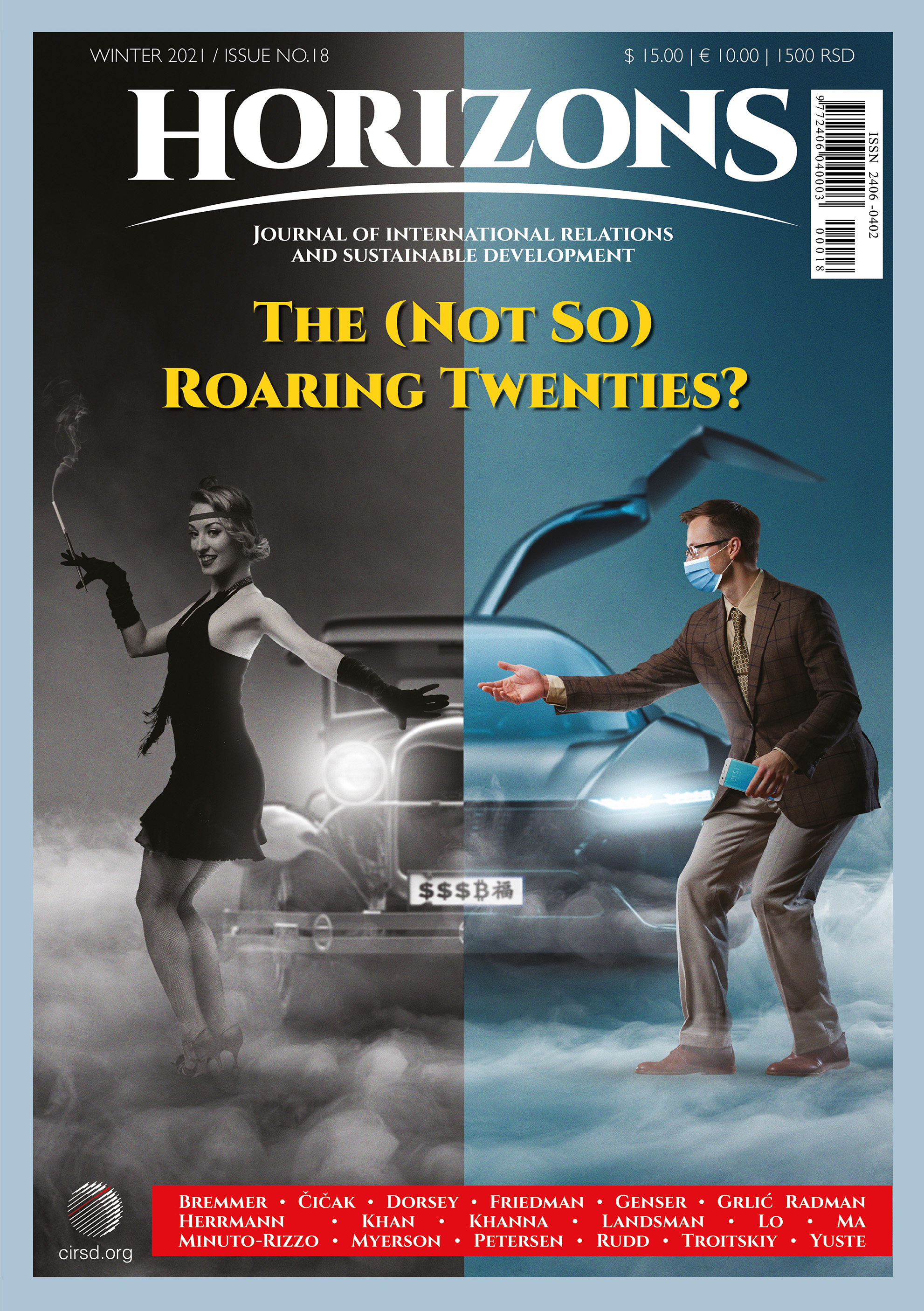 A CENTURY ago, a pandemic unmatched in lethality since the Black Death compounded the human catastrophe of the Great War. The sense of relief in their aftermath ushered in a decade of incredible social, artistic, and cultural dynamism, fueled by consumer demand for technologically innovative goods and services. Like many other generations emerging from a cataclysmic conflict, that one too embraced the illusion that history had come to an end. With the rejection of the Versailles Treaty and the rise of totalitarian ideologies still a long way off, prosperity and nonchalance in much of the developed world came to dominate the era known as the Roaring Twenties.

THIS edition of Horizons is hardly unique an attempt to draw comparisons between that decade and possible developments in the 2020s. The most obvious points of commonality at their respective outsets are global contagion and hope. Although the underlying statistics pale in comparison to those of the Spanish Flu, the coronavirus has brought enormous disruption and hardship to billions of people around the world. The repercussions will be exacerbated by at least three general trends that predated the COVID-19 pandemic, but have accelerated as a result of it. First, the cascading global environmental emergency brought on by decades of inattention and the present lack of appetite for carrying out sufficiently bold measures to combat climate change; second, growing inequalities within societies and between states that fuel increasingly flagrant populism; and third, resurgent rivalries between great powers that seem to be destined to intensify in this decade.

THE gradual easing of pandemic-related restrictions and the trillions of dollars injected into the global economy by governments will undoubtedly arrest the freefall and produce short term growth. But legitimate questions are being raised about the sustainability of the associated boom. The vaccine nationalism of today portends a widespread economic de-coupling tomorrow. Present squabbles over 5G infrastructure carry the omen of restrictions on consumers’ liberty to choose innovative goods and services crucial for sustainable progress, for instance in the fields of green technology and artificial intelligence. Hence the World Bank’s warning of a potential “lost decade,” with global growth predicted to be less than 2 percent per year in the 2020s.

THESE and related issues are taken up by our distinguished authors, as they examine in these pages the foreign policies of major powers, broad historical and geopolitical trends, and cross-cutting political and socio-economic issues like neuro-rights, international justice, and big tech regulation. Differences in approach and subject-matter notwithstanding, our contributors generally concur on one fundamental point: there is still time for the present generation to rouse itself to concerted action in order to prevent wholescale chaos. But the clock is ticking and there is hardly any leadership in sight.