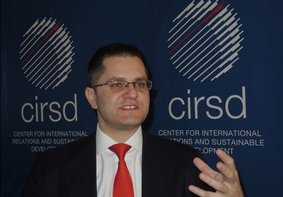 On Friday in Mexico City, CIRSD President Vuk Jeremić met with the leadership of Mexico’s energy ministry and its state oil and gas company PEMEX. They outlined Mexico’s strategic plan, proposed by President Enrique Peña Nieto, to allow outside companies to compete for oil and gas contracts in Mexico, as well as participate in operating pipelines, refining and electricity generation. The plan would also allow private companies to drill for oil and hold concessions for the first time since the oil industry was nationalized in 1938. A number of ambitious strategic infrastructure projects, including ‎pipelines to connect Mexico's Pacific Coast with the Gulf of Mexico, are integral parts of the plan.

Jeremić expressed his strong support for Mexico’s strategic energy vision. “Reforming the energy sector can serve as a catalyzer for transformational change in Mexico,” Jeremic said. “The positive effects of the energy reform package could have long-term benefits not only for Mexico, but for the world’s increasingly complex energy architecture,” he added.

Jeremić said that the additional revenues Mexico would receive as a result of the energy reforms could help propel the Latin American nation to the forefront of efforts to achieve sustainable development. “With the additional resources Mexico would have at its disposal, economic growth would accelerate and social spending increase, while greater attention could also be devoted to the critically important environmental dimension of the UN’s post-2015 sustainable development agenda,” Jeremić concluded.