The Center for International Relations and Sustainable Development held a Horizons Discussion entitled “The Belt and Road: Pledge of the Dragon” on February 19th 2018 in Belgrade. Moderated by CIRSD President Vuk Jeremić, the discussion about current world affairs featured one of the most influential and respected commentators on international affairs, Ian Bremmer and the former Prime Minister and Foreign Minister of Australia, Kevin Rudd. 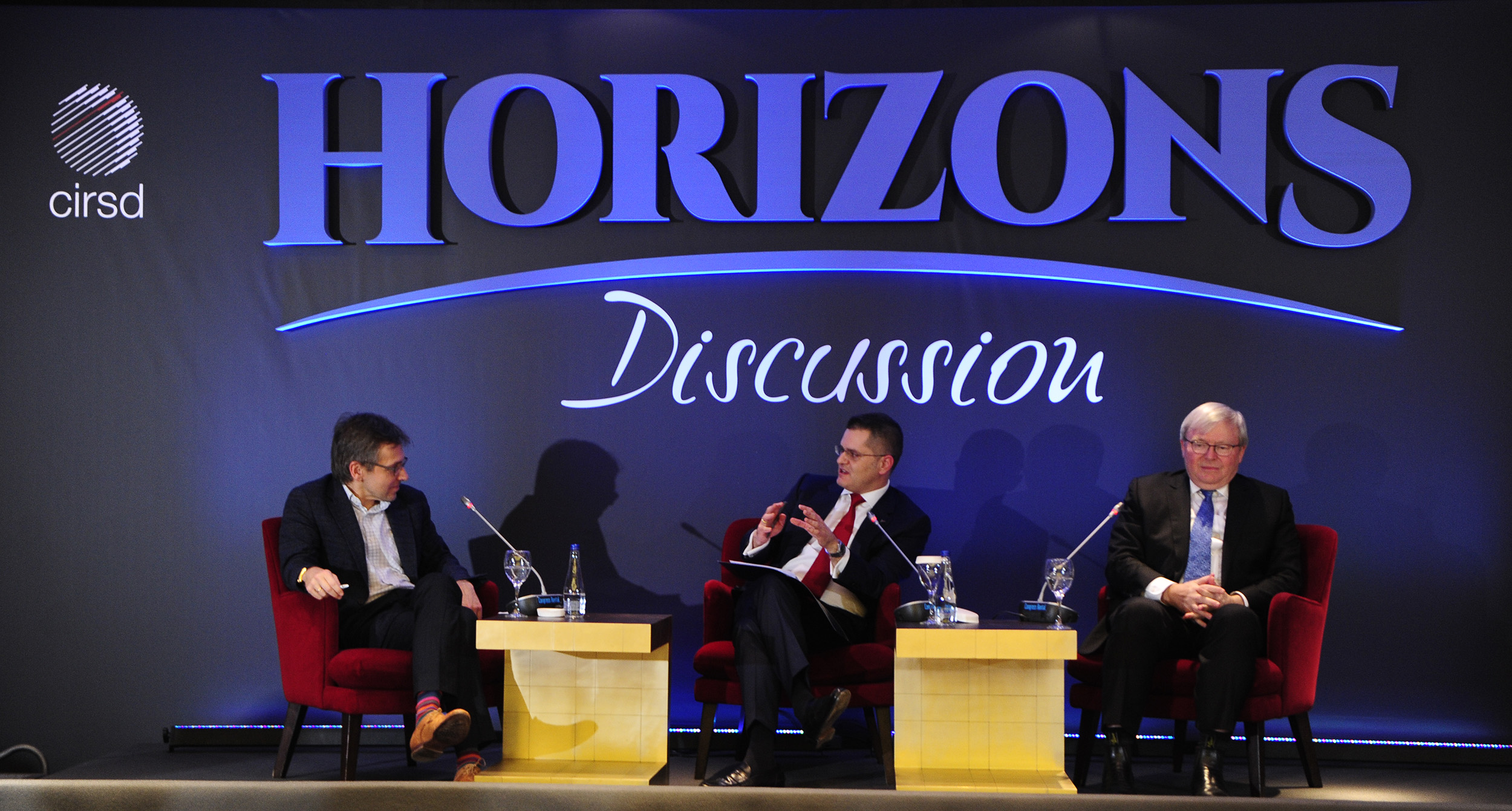 The discussion was attended by more than 700 guests, including numerous ambassadors, diplomats, editors of influential media, journalists, analysts, politicians, students, and public figures.

In his opening remarks, Jeremić said that he was honored to be hosting a gathering of such prominent international figures, and that it is a privilege to consider both of them close friends.

Introducing Bremmer to the audience, the president of CIRSD noted that Bremmer is the president and founder of Eurasia Group, the leading global political risk research and consulting firm. He is also a Global Research Professor at New York University, foreign affairstcolumnist and editor-at-large of Time magazine, and a prolific author. His international best-seller Superpower: Three Choices for America’s Role in the World has also been translated to Serbian and published by CIRSD.

Kevin Rudd is the President of the Asia Society Policy Institute in New York, professor at Harvard and Oxford, and is, as Jeremić stated, together with Henry Kissinger, one of the most knowledgeable Western experts on China.

„In his speech, Xi mentioned the fulfillment of China’s dream, and for the first time in a fully formal capacity announced the Belt and Road Initiative, a trillion dollar worth infrastructure project aimed to connect East Asia with the shores of Europe,” Jeremić added.

Bremmer recalled that 20 years ago, the Economist wrote about China and India, calling them „the rising giants”. He said that today it would be ludicrous to regard them as being in the same category, adding that “this year, the Chinese are going to be spending 10 times the amount of money as the Indians on domestic infrastructure. The Chinese together with the United States are now the super-power in technology and artificial intelligence. Indians are not even on the map in these areas, and they are not ready to play big time geopolitics.”

Commenting on the Belt and Road Initiative in the context of its „16 plus 1” regional dimension, and answering whether the Balkans should embrace this investment, Rudd said: “If there are alternative sources of investment capital, I am sure you would have all pursued them. If they are not really apparent, and China is offering to build infrastructure, which is needed, I think my approach would be to engage and to deploy. But here is the condition: that you do so on the basis of what you calculate to be in your own local interest, project by project. I would take this conditional approach.”

During the conversation, Jeremić asked Bremer to elaborate his statement that there is a risk of an accident happening somewhere in the world, with potentially devastating consequences. Bremer replied that an American base in Syria was attacked by Russians a few days ago, after which the United States hit back, killing over 200 Russian fighters. He pointed out that, although this barely made news in the United States, it strikes him as a big deal, since Americans have not killed Russians in combat since Vietnam. 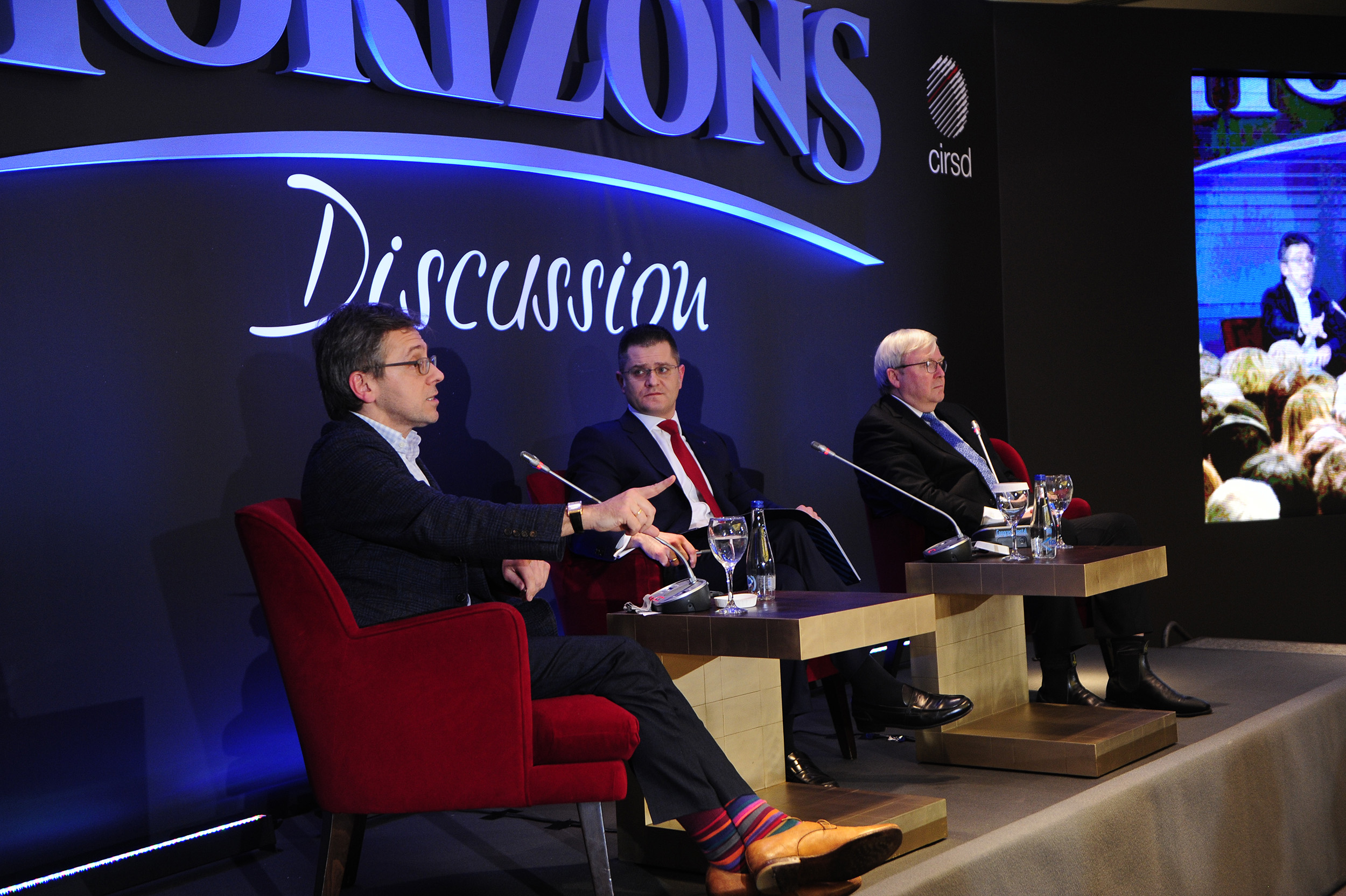 Asked about the maintenance of global peace in 2018, Rudd stated the strategic zone to observe most closely is North Korea and its completely uncertain trajectory. Their nuclear weapons and ballistic missiles programs continue to be developed, and, in his opinion, there is a continued prospect of conflict by miscalculation in this region.

Reflecting on the ongoing FBI investigation into Russia’s alleged involvement in American elections, Jeremić stated that the indictment says that the Russian annual budget for this secret operation was worth millions of dollars, while Donald Trump and Hillary Clinton each spent one billion dollars for their campaigns.

Jeremić asked if an investment of millions of dollars could decisively influence the result of American elections in which billions of dollars were actually spent, to which Bremmer replied: “That story dominated news in the United States for an entire week, and it should not have. Now with this investigation, it is absolutely true that the Russians spent millions of dollars in trying to delegitimize the election. Did they swing the election on the basis of couple of million dollars, five million, ten? Of course not.”

During the part of the discussion devoted to Brexit and the future of the European Union, Rudd expressed his worries about the future global competitiveness of the United Kingdom, stating the he is unsure whether the British political establishment understands how much of a “national suicide note” they have signed in leaving the EU. He added that the British suffer from the delusion that you can “have your cake and eat it too.”

“I think [the EU] is a good thing, not a bad thing; other states are aspirants to become full members of the European Union. Not because I think the Brussels bureaucracy is wonderful – it is not. But anyone with a passing history knowledge of the history of this continent know that a unified Europe under the Treaty of Rome is infinitely better that the centuries of bloodshed we have seen in Europe beforehand,” Rudd emphasized.

During the Q&A portion of the discussion, Brent Sadler, a former CNN Senior International Correspondent and chief of the editorial board of the regional N1 cable news network, asked Bremer about the situation in Saudi Arabia and the politics of Crown Prince Muhammad bin Salman.

Bremmer expressed his belief that Mohammad bin Salman is embarking on something transformational and revolutionary, stating that he believes in 90 percent of what he is doing at home. Bremmer underscored that the Saudi Crown Prince is trying to reform political Islam, which “definitely needs to happen.”

“Internationally, Mohammad bin Salman has made big mistakes, and he has not been helped by the President and the President’s son in law, especially regarding the tension with Qatar. Trump’s lack of impulse control and lack of knowledge occasionally leads to miscalculations that heighten risks and cause a lot of friction and instability in the region” Bremmer concluded.

During the discussion, the latest issue of Horizons, CIRSD’s flagship publication, was also promoted and distributed.