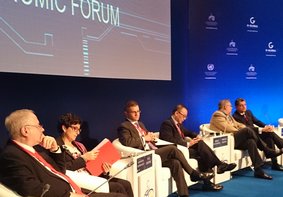 CIRSD President Vuk Jeremić participated in the Dialogue of Leaders of the 2014 Astana Economic Forum, hosted by President Nursulan Nazarbayev of Kazakhstan.

The conference’s keynote panel was held in the capital's Palace of Independence in front of an audience of several thousand. It featured remarks by former British and Italian prime ministers Tony Blair and Romano Prodi, as well as Kazakhstan’s Prime Minister Karim Massimov and Portugal’s Deputy Prime Minister Paulo Portas, in addition to four Nobel laureates in Economics.

In his address, Jeremić spoke of the effects of the worst humanitarian disaster in Serbia’s recorded history caused by severe flooding.

“We still don’t know the full extent of the damage—how many lives have been lost; homes, schools and hospitals destroyed. But what we know for sure is that Serbia has never been hit by a natural disaster of this magnitude,” Jeremić said.

During his stay in Astana, Jeremić also met with Kazakhstan's leadership, and extended an appeal to support the reconstruction of Serbia, underscoring the tremendous effort that will need to be made to recover from the consequences of the floods. 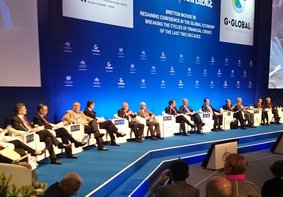