Home > News > Prof. Branko Milanovic: Corona virus pandemic has shown that one should no rely much on international solidarity, states are left to fend for themselves

Prof. Branko Milanovic: Corona virus pandemic has shown that one should no rely much on international solidarity, states are left to fend for themselves

The President of the Center for International Relations and Sustainable Development (CIRSD) Vuk Jeremic and world-renowned, Serbian-born economist Branko Milanovic agreed that the corona virus pandemic has shown that one should not rely much on international solidarity, and that states are now largely left to fend for themselves, as well as that the crisis will have serious political, economic and social consequences. 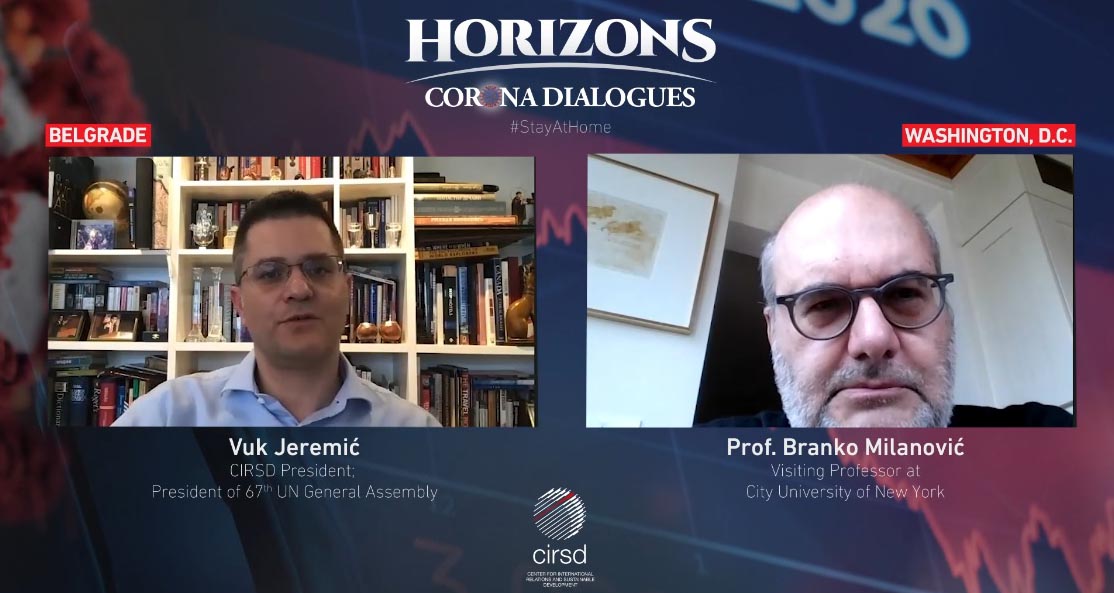 "The idea of a ​Europe without borders is fiercely shaken as it turns out that everyone is closing down and pursuing their autonomous policies when difficult circumstances arise. Europe, as during the Euro crisis, has bifurcated into north and south and there are conflicting views on the “corona bonds” that would be jointly guaranteed by all members of the monetary union, "Jeremic said during the video conference call with Milanovic.

CIRSD has launched the "Corona Dialogues" series in which Jeremic talks with world-renowned experts in different fields in order to better understand the corona virus pandemic and the consequences it will cause globally. Milanovic is one of the largest global academic authorities on issues of inequality and income distribution.

Milanovic said the crisis triggered by the pandemic represents a "great sobering-up in terms of European solidarity", adding that Europe has divided not only into north and south, but also into east and west. He expressed his view that the European bonds will not be issued because Germany, the Netherlands, Finland and Sweden oppose this, and rejected the possibility of a new Marshall Plan as unrealistic.

"There is no solidarity in a difficult situation. Governments are responsible to those who elect them, and the voters are national, not European. Although the European Parliament and the European Commission exist, their actions have been absolutely proven second rate in this situation. I think the EU will survive, but there will be significant negative consequences", Milanovic said.

Jeremic said the ocean of international politics has begun to make huge waves and compared Serbia to a small boat that could not count on assistance from other ships.

Milanovic added that small countries, such as Serbia, cannot count on the economic assistance of others in the short term because the crisis is global and very strong and that EU member states will also deal with their own problems. Probably "not much will remain for others that are not even members of the Union."

"Serbia will not be able to advance until Germany, Italy and Austria become what they once were. We can only hope that the situation will improve in other countries, so that trade and normal relations could be restored", Milanovic said.

During the discussion, Jeremic noted that some states have prevented the epidemic by imposing drastic measures that have affected the privacy of citizens.

"In China, applications have been used to give the country full insight into the movement of citizens, and in Azerbaijan, all citizens will have to seek permission each time they want to leave their homes, regardless of whether they are suspected of being infected. The same is happening in Russia, but also in many countries that are regarded as liberal democracies, such as Israel and Chile. The question is, once these applications and protocol are introduced, will they be revoked after the pandemic is over.”

Milanovic responded that much of it will remain in force, because in historical processes things do not function in a binary manner, with an "on-off" switch.

“Certain things that happen once tend to shape the future. Curfew will cease, but some form of privacy control will remain. A firm hand leadership is demanded by a significant portion of the population, who requires protection and finds it in an authoritarian leader. There is also a demand for more drastic measures and it is possible that this will strengthen authoritarian regimes significantly”, Milanovic concluded.