Home > News > Niall Ferguson and Vuk Jeremic: Back to the future

Niall Ferguson and Vuk Jeremic: Back to the future

Niall Ferguson, world famous historian, was the guest of the “Corona Dialogues” on May 4th, 2020. During the conversation with Vuk Jeremic, the President of the Center for International Relations and Sustainable Development (CIRSD), Ferguson said the reaction of the United States and most European countries to the corona virus pandemic was wrong, and that it will have devastating consequences. 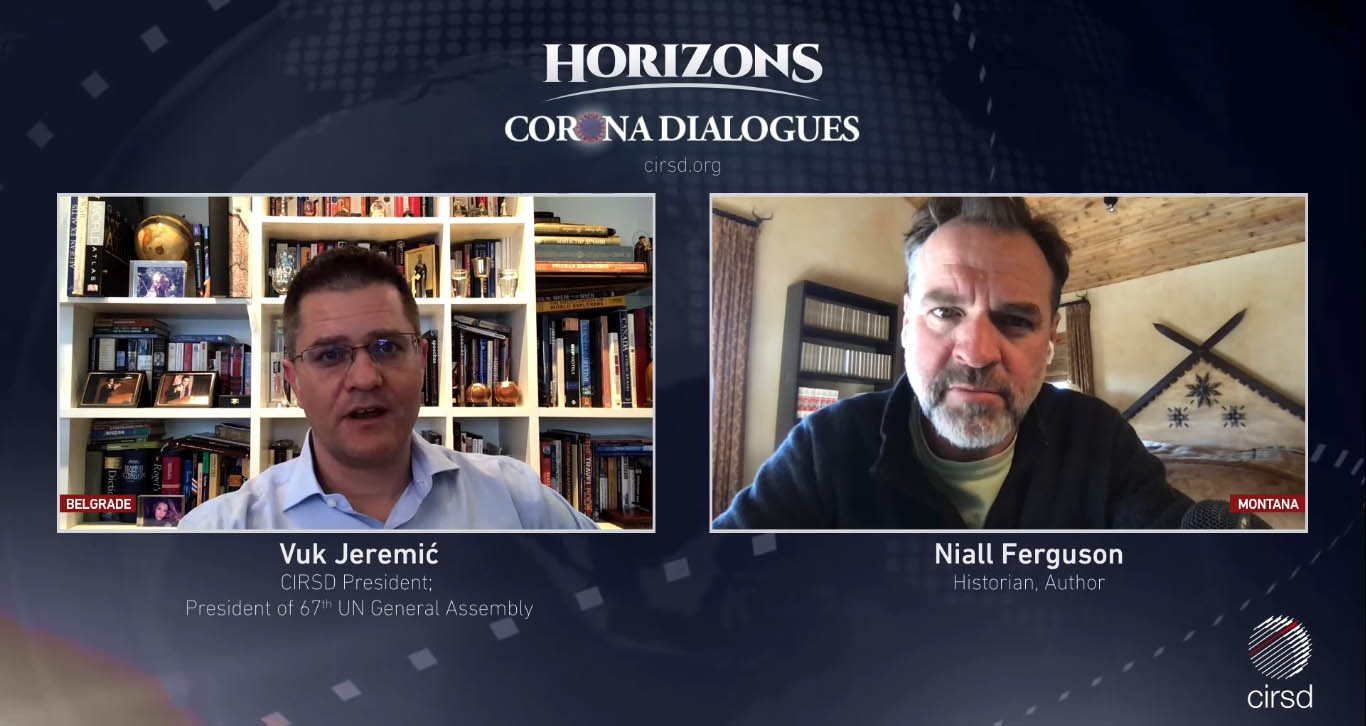 "Social distancing has been a far better response than economic lockdown. The closure of large parts of the economy was much less impactful than restrictions of any form of crowded activity. Closure of restaurants and bars, cancelations of public events, mask-wearing, rules that reduce crowding in public transport – those are the things that have been effective. Ceasing manufacturing does not have nearly the same impact on reducing the reproduction of the virus," Ferguson said.
Ferguson expressed his belief that it was a mistake to copy the Chinese approach, and that instead we should have done what Taiwan did - early detection through testing and contacts tracing  as well as quarantining the infected instead of shutting down the entire economy. Commending the Taiwanese approach, he added that they had a "trivial number" of fatalities during the pandemic.
"The blunt instrument of shutting the economy down has all kinds of massive, unintended consequences. We have created, through this lockdown, the biggest economic crisis, arguably since the 1930s, it could even end up matching the Great Depression. I do not think the public health benefit was commensurate with that shock,” he stated.
Jeremic stated that Serbia followed the example from Wuhan “to the letter”, and pointed out that America and Europe expressly adopted giant economic stimulus packages for their economies, while China did not do so.
Ferguson responded that these are not stimulus packages, but rather relief measures aimed to compensate for the shutdown of the economy, adding that one cannot stimulate something that is shut down consciously.
He stated that we completely overlooked the high probability of a second wave of the pandemic and underlined that throughout history all pandemics have come in multiple waves -  the 14th century plague known as the "black death", the "Athenian plague", the "Spanish flu" in 1918, as well as the influenza pandemic in 1957.
"We focused on flattening one curve in order to return to normal, but there will almost certainly be more than one curve. The only question is when that will happen. What are we going to do then, are we going to close everything again? I hope not. It would be good to think about the Taiwanese model of testing and contact tracing," Ferguson said.
Commenting on pre-pandemic geopolitics Jeremic stated that there was less and less cooperation in the world, and more rivalry and friction, adding that many believed a new cold war emerging between America and China, primarily in the field of technology.
Ferguson stated that "the second Cold War has started already”, and that it is both inevitable and good, because competition in the development of technology should be encouraged. He explained that America needs an external foe in order to perform better.
“Without an explicit Chinese challenge, the United States will not invest in different domains it needs to invest,” he explained.
Commenting on the role of the EU in the aftermath of the crisis, Ferguson stated that "Europe is not down and certainly not out."
Towards the end of the discussion, Jeremic reminded the audience that during a CIRSD event in Belgrade in 2016, Ferguson predicted the victory of Donald Trump in the presidential elections. Answering to the same question about the elections in November 2020, Ferguson expressed his belief that Trump will lose the presidential elections this year.
"By the time we get to the election, not only will the economy be as depressed as it has been during the lifetime of the oldest voters, but the pandemic will not be gone either. It was fun having a reality TV guy as president as long as nothing went wrong. When the crisis broke out, it became clear he was chronically incompetent. Even the best digital campaign cannot compensate for that anymore," Ferguson said.
Ferguson also reminded that the candidates, both Donald Trump and Joe Biden, are in their seventies and by nature of their profession are very exposed to the covid-19 disease, so there is a scenario where neither of them is available to contest the election in November.