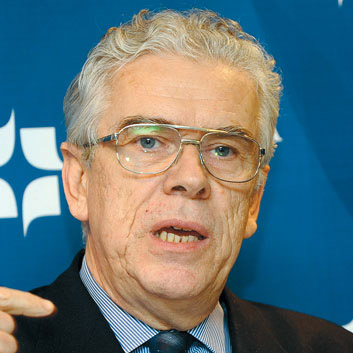 The first great environmental alarms went off in the beginning of the 1970s, when the two reports from the Club of Rome—entitled The Limits to Growth (1972) and Mankind at the Turning Point (1974)—were published. Simultaneously, Stockholm hosted the UN's first environmental conference. A lot has happened since then. Another three global conferences on the environment have been held, mankind has begun launching concrete environmental projects, and existing energy resources and materials have continued to be replaced by more environmentally friendly ones. Still, the limits of growth remain as a warning; reminding us that it is truly necessary to choose a safer path for the future of mankind.

One area where much more can be done is in education. This is a resource which, unlike oil or bauxite, will not likely fade away, but is rather consistently growing. The fact that speaks most in favor of this is that out of all scientists who have lived from the times of ancient Egypt to today, 90 percent are still alive! The first aspect of education opens up new possibilities, such as substituting current energy sources and materials, as well as increasing efficiency in using limited resources.

The second aspect of education is directed to induce a change of mindset, and through it change mankind's relationship with the environment. Just as consumerism has affected our spending and thus instigated more production and growth, it should be the role of ecologism to now establish a balance in our relationship with the environment and reduce humanity's pressure on the ecosphere permanently.

That said, I will mention a couple of seemingly banal examples of how we might start behaving more rationally. First, the next time you are travelling somewhere, I urge you to pay attention to the number of vehicles with only one person in them. You will be surprised to learn, just as I was, that this happens to be the case about 70 percent of the time. Some developed countries have established the carpooling principle—one being immensely favored by their respective pay-toll and tax-exempt systems. Second, try paying attention to a number of drivers willing to follow the “environmentally conscious” instructions at long traffic-lights, often kindly requesting that they turn off their engines while waiting. Again, you will be surprised to learn that not many of the drivers choose to follow through. Put together, actions like these slowly but surely enhance the greenhouse effect.

Worldwide experience shows that there is a positive correlation between a country’s development and how that country uses education in protecting the environment. Without a shadow of a doubt, the situation is much better in countries like Switzerland, Canada, and Japan than in countries like Bangladesh, Zimbabwe, and Bolivia for instance. In both sets of countries, however, there is still much room for progress.

There are two ways in which we can act: first, by launching a set of public education campaigns aimed at people of all ages. Second, by incorporating the necessary elements into our education system, beginning with preschool. What we should do to tackle this is educate the “little green ones,” as opposed to letting them become another generation of profligate consumers whose success in life would be measured by their automobile engine power, the size of their swimming pools, and the amount of concrete they used to cover the lawns in front of their villas.

The above two ways of action are not mutually exclusive. In order to achieve the desired effect, it would certainly be preferable to apply both. Fortunately, such campaigns are cheaper than air or water filters. Better yet, education of the “little green ones” is virtually free of charge, but the impact it makes might have a lasting effect.

We are getting an increasing number of warnings that the turning point is fast approaching, manifesting itself in the form of rising global temperature. Let us turn to teaching the “little green ones.” After all, it is their future that is at stake.