The second round of the 2017 French Presidential Election will feature En Marche’s candidate Emmanuel Macron and Front national’s Marine Le Pen. Although opinion polls have predicted such an outcome, their predictions can in no way diminish the dramatic and historical character of this election. 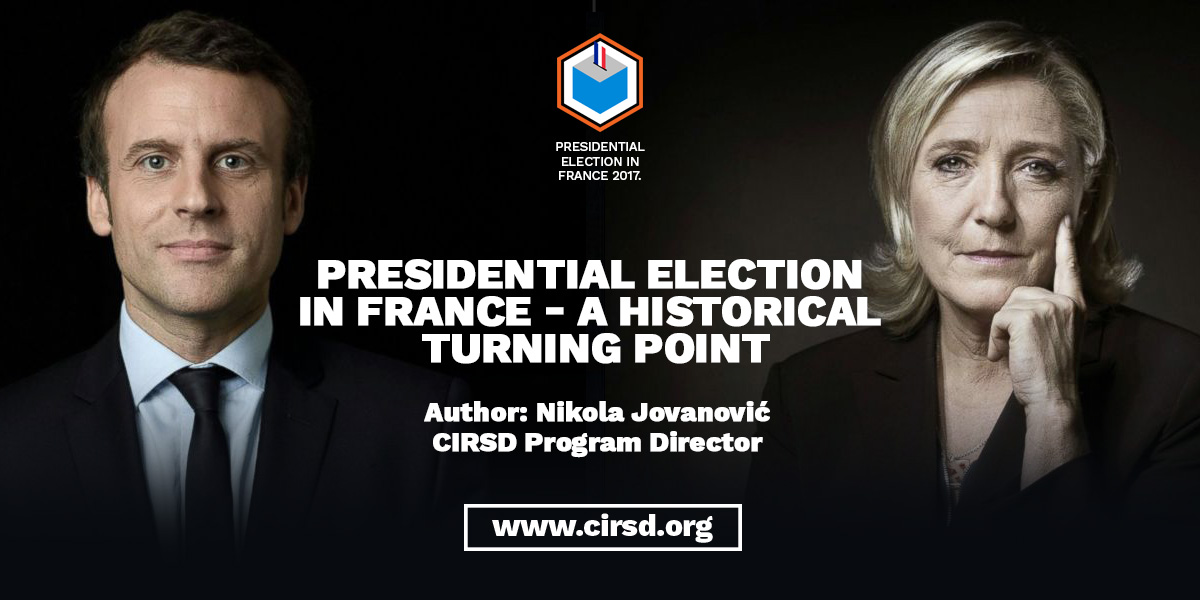 For the first time since the making of the Fifth Republic (1958), candidates of the two main parties, Gaullists (now The Republicans) and Socialists, did not enter the second round of a presidential election. This could easily mean that the end has come for the two traditional formations, especially the Socialist Party, but it could also represent a dying breath of the entire Fifth Republic.

The current constitutional order in France envisions the presidential system of government, and effectively tends to limit the influence of political parties (and even the parliament). However, in practice, almost every president thus far has enjoyed support by an absolute majority in the parliament, not needing to worry about the legislative being blocked—something which was allowed by the virtue of big parties’ ability to generate a presidential majority. In other words, this time around, there will either be a complete generation change and the two parties will live only to see themselves being replaced by successor parties, or we will witness the birth of the French Sixth Republic—with none of us knowing how it might look like.

The demise of the two traditional parties might bring about one additional far-reaching consequence. If Macron wins and ends up having an unsuccessful term in office (which has become something of a rule in France since Mitterrand’s era), there will be no more organized political barriers to Front national’s seizure of power.

Put another way, France has five years at most to renew its political/governing elite and initiate economic growth before the current constitutional order faces a definitive disintegration. In such circumstances, a majority of voters might see Front national as the only alternative to the existing system.

Who is Emmanuel Macron, a man whose victory in the first round basically ended the traditional left and right’s monopoly on power in French politics? His life path and career are complementary to that of many existing figures in the French elite. Still, a certain charisma and courage, and to an extent, a set of circumstances, have basically turned him into a historical figure.

The sitting president of France François Hollande has had a continuously low approval rating, and it was the beginning of 2016 that it became obvious that neither him nor anyone from his party would be able to represent a serious option in the 2017 presidential election. On the other hand, the Republicans’ (the country’s center right giant) main asset was Nicolas Sarkozy, the former president and a person whose political capital has already been expended. The situation on the right improved in November 2016 once François Fillon surfaced as the party’s frontrunner, replacing Sarkozy. Fillon, Sarkozy’s former Prime Minister, had proposed a radical economic program (which included cutting the public sector’s number of employees by half a million), which in addition to numerous scandals added up to his inability to garner broader popular support.

For the first time there was a real possibility of Front national’s victory—a party that openly advocates for France’s departure from the European Union and the Eurozone and whose rhetoric reeks of xenophobia. Parts of the French elite have thus openly declared support for Macron, who resigned as minister and launched a new movement called “En Marche!” He distanced himself from the Socialists at the very onset, occupying the center position—which thus far has not been a winning combination in France. However, considering how deeply unpopular Hollande and his Socialist Party were, as well as the increasingly obvious lack of a new unifying figure on the right, Macron’s choice turned out being the right (and the only rational) choice.

Macron is a very young politician for French standards (39) and comes from the world of finance. What makes things even more interesting is that he has no prior record of participation in French elections. His political organization was founded a year ago. Even though he served as Hollande’s advisor and a minister of economy in “his” government, Macron is actually an intellectual offspring of Jacques Attali, the most influential French globalist intellectual and the one that introduced Macron to the sitting president. Macron’s economic program was written by one of the leading French economists Jean Pisani-Ferry. The program represents the only serious document to be publicly presented during the campaign.

In terms of economics, Macron is a social liberal, whilst his foreign policy views qualify him for an interventionist—albeit in the multilateral framework. He has been advocating for a France that achieves and multiplies its interests through the framework of the EU and the UN. Political opponents have accused him of lacking ideology and a clear political program, but also of being influenced by financial and corporate elites. He is the only one among the serious candidates in the race to have advocated the deepening of EU integration. His victorious result in the first round was followed by sighs of relief in Berlin and Brussels, but also by discrete disappointment in Moscow, toward which Macron maintains a tough stance. Future French foreign policy will be analyzed in a separate article, once the second round has been completed and the new president sworn into office.

Macron and Le Pen’s face off in the second round will have an enormous intellectual and ideological significance that transcends French national politics. This will be a clash between the two visions of not only France but the entire Western world. Macron is an advocate of European integration, multilateralism, liberal interventionism, multiculturalism, free trade, free capital flight, and open borders. Le Pen symbolizes sovereignism, economic protectionism, euroskepticism, xenophobia, and Islamophobia (if that is the right word to use here). She also announced a referendum on France’s exit from the EU.

Considering how the two traditional parties already voiced their support for Macron in the second round, there is a strong chance (and this author’s belief) that he will be elected. Before him lie great challenges: getting the French economy on the move, fighting terrorism, reviving European integration, and healing the wounds of political, cultural, and racial division within the country. The first challenge is to secure a presidential majority in the June 2017 parliamentary election. Given the complexity of such tasks, as well as the fact that most voters see might see him as a barrier to Front national’s seizure of power (as opposed to a unifying figure with non partisan charisma), his success is not guaranteed and chances of his term ending up in disappointment for French voters are far from slim.