Home > Horizons > The OSCE is Indispensable for Security in Europe

The OSCE is Indispensable for Security in Europe

Frank-Walter Steinmeier is Foreign Minister of the Federal Republic of Germany.

WE CURRENTLY face what is perhaps the most serious threat to peace and security in Europe since the end of the Cold War. We are fully aware of what it means to assume the Chairmanship of the Organization for Security and Co-operation in Europe (OSCE) in these difficult times, and of the responsibility we will bear for Europe.

The motto we have chosen for our OSCE Chairmanship is “Renewing dialogue, rebuilding trust, restoring security.” We will work hard to pursue these priorities until the very end of our one-year mandate. Of course, our dialogue cannot and does not want to hide the fact that key OSCE commitments have been, and are being, broken. Our dialogue does not ignore the shortcomings in implementing our principles and commitments.

We need to name difficulties and challenges, but also work towards solutions.
Trust in Europe has been greatly diminished over the past few years. It will be difficult to rebuild—but there is no way around doing so. I would like us to be able to say to future generations that we did everything possible to maintain peace on our continent.

But can such a large and diverse organization as the OSCE really foster peace and security in Europe? I actually think it has quite a few advantages over other international organizations. The process of the Conference for Security and Cooperation in Europe—the OSCE’s predecessor in the 1970s and 1980s—has taught us that it is all the more important not to break off dialogue between participating States in times of deep distrust and growing uncommunicativeness between East and West.

Over the years, the OSCE has developed an agenda that covers almost all the challenges we are facing today. Based on its comprehensive concept of security, this agenda ranges from modes of hybrid warfare and transnational threats, to human rights and issues linked with migration in the fields of security and economic growth. 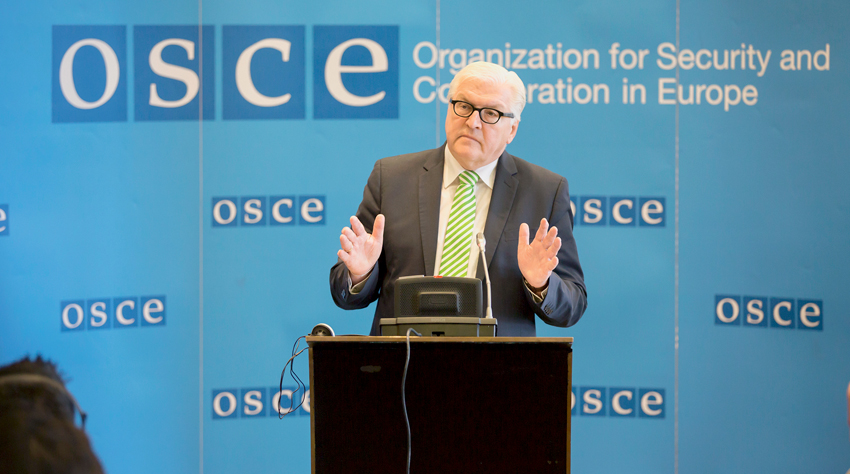 The fact that the OSCE has now become the largest regional security organization in the world shows just how this organization and its agenda are contemporary. We need to build on this-and on the OSCE’s established methods-particularly in a time when the conflicts in the OSCE area have seriously undermined trust and security.

The principles and commitments of the OSCE are, and will remain, valid. Taken together, they form the foundations for peace and security in Europe.

It is important to realize that without the OSCE there would be no chance of any success under the Minsk Peace Process. The OSCE has made a crucial contribution to initiating a political process with the potential to resolve the conflict in Ukraine through its Monitoring Mission and the key role the organization plays in the Trilateral Contact Group. This has raised the entire organization from a kind of Rip van Winkle slumber and put it back on the international security policy stage—and at just the right time, in my opinion.

The conflict in Ukraine, in spite of all the suffering and instability it has brought to the region, has also shown just how indispensable the OSCE is for security in Europe. Without the Monitoring Mission in Ukraine, we would not have made as much progress as we have on military de-escalation and the withdrawing of weapons—no matter what the setbacks have been. We must now waste no time in taking the necessary decisions on the Mission’s mandate and budget, so that the monitors can continue their important work.

The mandate of the OSCE’s Special Monitoring Mission in Ukraine has proven its worth. It gives the mission all the scope it needs to fulfill its tasks. The monitors are able to respond flexibly to developments on the ground, and to meet new demands as they arise-provided they are given unfettered access to the areas in question.

Unfortunately, the crisis in Ukraine is not the only unresolved conflict in the OSCE territory. I do not want to adopt the kind of fatalism that is expressed in labeling as “frozen” the unresolved conflicts in, for instance, Transdniestria, Nagorno-Karabakh, and the Southern Caucasus. Each year they continue to bring hardship to the people affected and stagnation to the regions involved. We want to make every effort to stabilize the ceasefires, build trust, and alleviate the daily lives of the people by taking small but tangible steps, such as improving economic exchange.

As regards the Nagorno-Karabakh conflict, armed clashes along the line of contact and the border between Armenia and Azerbaijan give us cause for concern. Germany is campaigning for an intensification of the negotiations under the auspices of the OSCE Minsk Group. One important step to this end would be to investigate violations of the ceasefire more systematically.

In Transdniestria we are seeking a comprehensive settlement that recognizes the sovereignty and territorial integrity of the Republic of Moldova, whilst granting special status to Transdniestria.

In Georgia, too, the situation is not straightforward. Nevertheless, progress was made recently regarding practical cooperation between the parties to the conflict. We want to maintain this momentum and underpin it with confidence-building measures and humanitarian action.

If any of these conflicts are to be resolved—if the consequences are to be contained and the security situation on the ground improved—we will need a strong OSCE with strong field missions—not only in the regions mentioned, but also in the countries of Central Asia and the Western Balkans. The missions, supported by the OSCE Secretariat, are doing valuable work. We will have to continue to work on strengthening the OSCE’s capabilities in the entire conflict cycle—from early warning and conflict prevention, to crisis management and post-conflict peacebuilding. And we will have to make full use of the experiences the OSCE has acquired over the past decades.

Confidence- and security-building measures, as well as conventional arms control, are among the core issues affecting security in Europe. Since 1990, the Treaty on Conventional Armed Forces in Europe, the Open Skies Treaty and the Vienna Document have gone a long way towards making our continent safer. We should not call these regimes into question; instead we should make every effort to modernize them. With regard to the Vienna Document, we have put forward proposals which provide a constructive basis for this discussion.

Unfortunately, other pressing issues on the international agenda are also likely to continue shaping the work of our OSCE Chairmanship.

The appalling attacks in the hearts of Brussels, Ankara, and Istanbul, as well as last year’s acts of terrorism from Paris to Beirut, have made it painfully clear that the threat of international terrorism affects all of us. It is also clear that no country can quash this threat on its own. In the coming years we will have to strengthen the counter-terrorism capabilities of all 57 OSCE states. Switzerland and Serbia, our predecessors in the Chairmanship, carried out important work in this field. We want to build on this—for example by hosting an international anti-terrorism conference in Berlin this summer.

Another issue that has kept us on our feet is the refugee crisis. By now, it has become obvious that we will not make headway with national strategies alone. As hard as it may be to reach agreement in Europe, we have to continue seeking joint solutions. Within the OSCE, we are united by our common interest in combating the causes of the crisis and improving border management in the OSCE area. We will build on this common ground in the course of the year.

In the long term, integration will be a huge task for society. That is why it is so important to act with determination against intolerance, discrimination, and xenophobia in the OSCE area right now. The German Chairmanship is focusing on these issues specifically, in part because of our responsibility for our past.

Last, but not least, defending human rights and fundamental freedoms is also right at the top of our agenda. In the human dimension, the OSCE has established independent institutions—the Office for Democratic Institutions and Human Rights, the High Commissioner on National Minorities, and the Representative on Freedom of the Media. All these institutions have become indispensable pillars of a concept of security that links the preservation of peace to the respect for human rights and fundamental freedoms. We will work to ensure that existing obligations in the human dimension are duly complied with by all OSCE states—including ourselves, of course. Germany will—just like Switzerland and Serbia before us—submit to an independent evaluation that will assess the implementation of OSCE commitments in our country, and to which civil society can contribute with comments.

Good governance also remains a key criterion for sustainable economic exchange—and both are crucial for building trust. We therefore want to engage more deeply in dialogue with businesses and hear their views on how we can strengthen economic ties in the OSCE area in a sustainable way—in domains such as infrastructure, transportation routes, border and customs procedures, as well as digital networks. This would ultimately be of political and economic benefit to all of us.

A year passes quickly. The first months witnessed the first OSCE events chaired by Germany, such as the Conference on Cyber Security in Berlin. In December 2016, we will meet with the OSCE Foreign Ministers in Hamburg and take stock of our year at the helm of the organization. My hope is that we will take some steps towards more constructive dialogue and action between the OSCE’s participating States once more. We have to do more than simply “manage” the status quo.

As the country holding the OSCE Chairmanship, Germany is seeking to foster consensus within the organization. Consensus-building lies with the Chairmanship. The political will to compromise and find solutions, however, lies with all participating States. It would be a success for us all if everyone in the OSCE were to play their part.