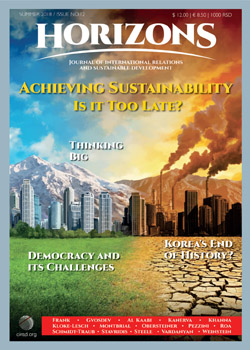 Beginning in 1947, the Bulletin of the Atomic Scientists has annually set its iconic Doomsday Clock at between two and seventeen minutes to midnight. Ever since, it has served as an authoritative, independent barometer of the globe’s vulnerability to self-inflicted catastrophe.

The Clock is presently at two minutes to midnight—the closest it has ever been to indicate imminent planetary destruction, equal only to its 1953 position at the height of the Cold War. This is attributable to numerous factors, including the deterioration of relations between the United States and China, along with the uncertain fate of the Iran nuclear deal and North Korea’s nuclear program. These are but three of the many examples of a general state of geopolitical confusion that, in the words of one Horizons author, is emblematic of “global heterogeneity” and great power ambivalence towards the traditional roles they have played across the world. In our present edition, others focus on what often appear to be disruptive debates on both sides of the Atlantic about democracy and shared values as driving forces of history—and how these have resonated beyond the West—as well as the countervailing force of infrastructural and technological connectivity in deepening globalization.

Unnoticed by many observers, however, is the fact that the position of the Doomsday Clock is now equally determined by an assessment of the existential danger to humanity posed by global warming. A recent United Nations report has put this in stark terms: not a single country is on track to fulfill the 17 Sustainable Development Goals (SDGs), including the one dedicated to combatting climate change.

These disturbing findings illustrate the rapid reversal of fortune of one of this generation’s most important multilateral achievements. It was just over three years ago, in September 2015, that world leaders gathered in New York under the aegis of the UN to adopt, with great fanfare, the 2030 Agenda for Sustainable Development. At the time, the treaty was hailed as an historic breakthrough: a universal recognition of the urgent necessity to engender comprehensive and coordinated global change in economic, social, and environmental policies. No nation was to be left behind, and no country chose to opt out.

Today, very little evidence points to the longevity of the commitments made by governments to undertake the strategic, across-the-board implementation of the SDGs. As another of our authors writes in these pages, not even European leaders—once the most vocal champions of sustainable development as an imperative for humanity—have endeavored to maintain the momentum of 2015.

Evidently, there are success stories, too—sometimes in the most unexpected places—as argued by a final group of authors in this volume. These serve as welcome counterpoints to the increasing pessimism of even the most hopeful advocates of the 2030 Agenda, who have begun forebodingly to ask themselves: Is it too late for the world to achieve sustainability?