Aleksander Kwasniewski is a former President of the Republic of Poland. He is Chairman of the Board of Yalta European Strategy, member of the Board of Trustees of the International Crisis Group and the Atlantic Council of the United States, as well as Head of the Supervisory Boards of the Amicus Europae Foundation in Warsaw. Until November 2013 he co-led (with Pat Cox) the European Parliament monitoring mission in Ukraine. 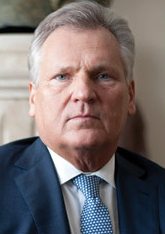 IN 2014 Ukrainian-Russian relations became pivotal for global international relations. For the first time in many years, ordinary people in the streets of European cities started to speak openly about their fear of war—this was unimaginable even a year ago. The key question facing us today is whether the change marked by the Ukrainian-Russian crisis will be peaceful and eventually lead to better international cooperation, or will it return us to a confrontational pattern of co-existence? To answer it, let us begin by taking a look at how we arrived at our present situation.

Although there are many disputes among Ukrainian historians, there is one thing that unites most researchers: the Kyiv Rus, founded in the ninth century, constituted the first form of Ukrainian statehood. In the following centuries it experienced many ups and downs, even though Kyiv Rus was one of the largest countries in Europe by the tenth century. It was weakened by successive Tatar invasions, finally losing its political independence in the thirteenth century. This defeat contributed to an increased awareness and drive for self-determination in what later became the Ukrainian nation.

In the fifteenth century a new center of power was created by the Dnieper River—the Zaporozhian Sich. It was a unique political and military phenomenon in that period of European history. The inhabitants of the Sich—Ukrainian Cossacks—remained autonomous until the eighteenth century, when Russian Empress Catherine the Great deprived them of their independence. This provoked the creation of a national renewal movement—both cultural and political. Ukrainians developed a strong awareness of their national identity and a sense of distinctiveness from the Russian Empire. This led to numerous repressions, due to the dissatisfaction of the emperors who followed the reign of Catherine the Great.

In the nineteenth century the first political parties began to be formed. Cresting the waves of political unrest that shook the Russian Empire at the beginning of the twentieth century, the Ukrainian People’s Republic was established during the 1917 February Revolution. After the disintegration of the Austro-Hungarian Empire, the West Ukrainian People’s Republic was proclaimed. In 1919 these two republics merged into a single state. Despite huge efforts, the 1917–22 struggle for Ukraine’s independence was not successful. Ukrainian lands were annexed by the Soviet Union, resulting in many decades of subjugated existence. This period came to an end only with the collapse of the Soviet Union in 1991.

The policy of glasnost, initiated by Mikhail Gorbachev in the 1980s, brought some freedom to Ukrainians. The “People’s Movement of Ukraine” was the Soviet Union’s first mass civic and political organization, and its focus was on supporting independence. Remarkably, labor strikes erupted in the Donbas. On July 16th, 1990, the parliament of the Ukrainian Socialist Soviet Republic proclaimed a Declaration of Sovereignty within the USSR, with the approval of Moscow. One year later, on August 24th, 1991, the Verkhovna Rada officially approved the Act of Independence of Ukraine. On December 1st, 1991, a referendum on the issue took place. Turnout was sky-high, reaching 84 percent—with 90 percent of those who voted casting their ballots in favor of independence. Remarkably, the level of support was similarly high in the currently rebellious Donetsk and Lugansk oblasts. Even 54 percent of the citizens of “eternally Russian” Crimea voted for independence. Along with the referendum, a presidential election took place, and Leonid Kravchuk became the first president of an independent Ukraine.