The Center for International Relations and Sustainable Development (CIRSD) celebrated the launch of the latest issue of its flagship magazine Horizons by organizing an online discussion on October 27th, 2020.

The discussion entitled “America at Crossroads”, moderated by CIRSD President, Vuk Jeremic, featured Neera Tanden, President and CEO of the Center for American Progress and a former senior official in the Obama Administration, as well as Hillary Clinton’s campaign adviser on domestic affairs, and Richard Fontaine, CEO of the Center for a New American Security and a former senior adviser to the late Senator John McCain, who also held various posts at the State Department, the National Security Council, and the Senate Foreign Relations Committee. 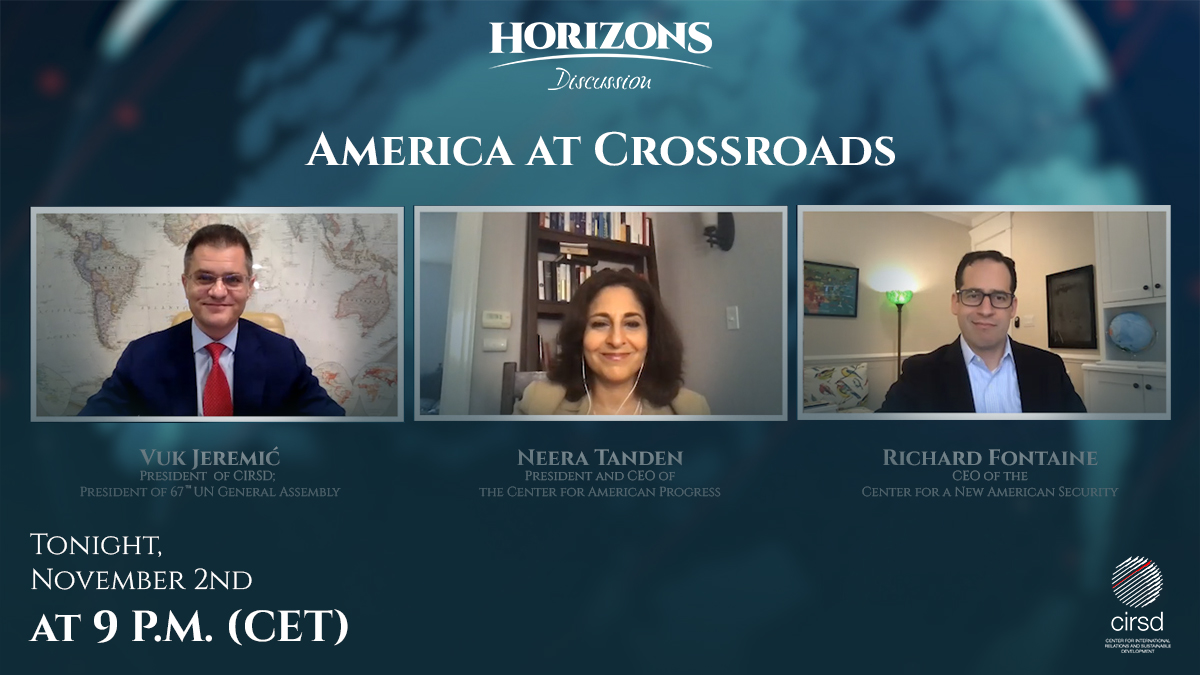 During the discussion, the three interlocutors agreed that the United States is in a deep crisis, and that the outcome of the upcoming U.S. presidential elections will greatly determine the direction of global affairs in the following years.

“This is a season of darkness – this grave statement resonates in a way both like a moral indictment and a description something sinister afoot. These words were not directed at a foreign country or spoken by an enemy of America, rather they were uttered by a U.S. presidential candidate placing the blame for America’s stumbles squarely on the shoulders of his opponent” , Jeremić stated.

Jeremić underlined that divisions plaguing America predate the arrival of the current occupant of the most powerful office in the world. He added that it was unlikely they would be overcome by his departure, whether now or in four years.

“Fervent geopolitical rivalries did not suddenly appear as he took the oath of office and sclerotic state of international multilateral institutions did not first appear during history. Similarly, inequality of opportunity and social injustice aren’t novel challenges to the American body politics. The “Black Lives Matter” movement may be new, but the tradition of vigorously demonstrating for change has a long history in America,“ Jeremić explained.

Jeremić stated that fierce debates over taxes, trade, income, rule of law, and immigration policies are also not new. He added that although most of the authors from the latest Horizons issue agree America is in a crisis, it remains a leading global power.

In Tanden’s view, the Trump administration was generally unsuccessful.

“We have a level of division and hostility between Americans that I have never seen in my life”, she said, adding that America never had a President like Donald Trump, who does not only exploit division, but seeks it out and uses it.

She noted that despite being one of the richest countries in the world, the U.S  has one of the worst results in fighting the coronavirus - more than 200,000 people have died as a result of gross incompetence.

Commenting on the trade war against China, Tanden expressed her belief that it did not bring results –the Chinese did not change their behavior, and the American citizens paid the price which resulted in a biggest trade deficit with China in the history of the U.S.

On the other hand, Fontaine, a Republican, stated that the economy was in good shape during Trump’s presidency, adding that the unemployment rate was very low before the pandemic.

“The economy was doing well overall and unemployment was very low before coronavirus hit. The normalization between Israel and key Arab countries such as Bahrain, and UAE and Sudan is a diplomatic win in the Middle East and I think they deserve credit for it” Fontaine explained.

Fontaine pointed out that one of the accomplishments of the Trump administration was ending the ISIS caliphate and expelling the terrorists from occupied territories.  He also praised the current administration for taking a more realistic course towards China than their predecessors.