France got a new president who, according to all of his external characteristics, represents a break with the country’s political scene. Emmanuel Macron is only 39 years old, which seems as insufficient life experience for French standards on highest government positions. He comes from neither of the two traditional parties, nor was he known to the French public only three years ago.

However, on crucial issues (and policies he will likely pursue), the newly elected French President will embody continuity with the country’s policies since 1995. This could perhaps serve as an aid in responding to the question of “who is backing Macron,” and the answer is: a majority in the French elite. The elite has already found its champion outside the traditional parties that seem to be rapidly losing their credibility and relevance. Economic and bureaucratic elites have thus opted for a new face—one on which they could count to spark enthusiasm among young people and bring the rise of the sovereigntist and populist Marine Le Pen to a halt. The French establishment bought itself another five years of standard therapy, but absent of real change (first and foremost in Europe), a break with existing policies and a rise of the populists to power will be inevitable. 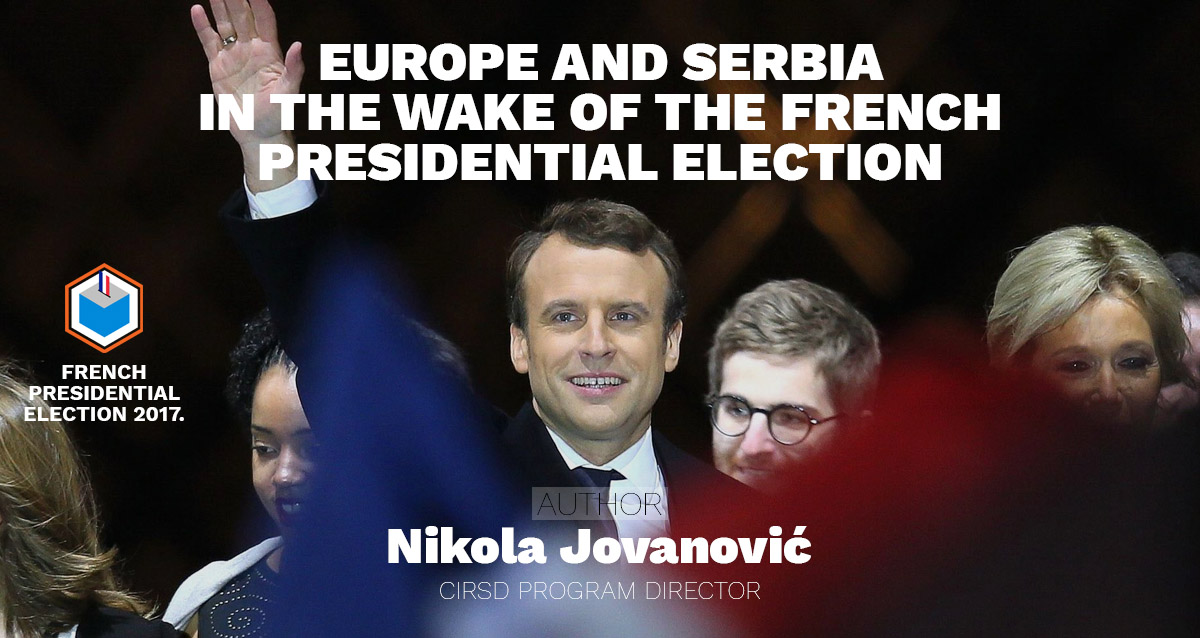 The fact that he represents the aforementioned continuity will in many ways force Macron to face the same obstacles and limitations as his predecessors. The most important question for France is redefining its relations with Germany. Since the foundation of the European Central Bank in Frankfurt in 1998 (and especially since the onset of the 2009 public debt crisis in Europe) Germany has been the most influential EU member, while France found itself in something of a subordinate position within the Union. The source of German influence has not only been the amazingly efficient economy, but also the efficiency of the Eurozone—which continues to work in Berlin’s favour. A strong euro, prohibited subsidies for the domestic economy, a lack of solidarity and redistribution, and the instant application of rules with no prior discussion among the member states—this was all a German vision of the EU that has since become reality for all Eurozone members.

Macron will ask for the same as his predecessors did: political governance over the Eurozone (a common minister and a parliament) and a joint budget from which investments and infrastructure projects would be financed. As it did with Macron’s predecessors, Berlin will refuse all such demands, for it is content with the existing order of things and remains aware of how technically difficult (if not impossible) it would be for the dissatisfied Eurozone members to leave it (to this day, this is the primary reason why the UK never gave up its pound sterling in favor of the euro). Once France’s requests fall through, Macron will strive to soften Berlin’s positions and gain Germany’s trust by copying their policy of budgetary surplus—something that our leadership too has been doing in an attempt to “prove” itself in the eyes of Berlin. However, the new French president will be able to see, just like his predecessors have, that the policy of strict budgetary discipline lacks an economic foundation, but is instead driven by an ideological one. He will also realize that such a policy produces negative results for those states that have not yet completed their investment cycle. At the same time, this “unilateral adjustment” toward Berlin secures no softening of German positions when it comes to the shape and mechanisms of future EU functionality.

Once the new French administration realizes that it is impossible to directly restore the balance in the relationship with Germany, it will try to do so indirectly: by engaging the Mediterranean and the EU’s periphery more assertively. For decades, France has been trying to compensate for the influence it lost in Continental Europe in the continent’s bordering regions. Thus, we reach the section on new opportunities for Serbia. As long as the Balkans remains under the exclusive influence of one major European power, its destiny will be to stay on the continent’s margins. In a region that finds itself on the margins, what matters is the so called “stabilocracy,” which essentially serves as a different name for the “iron fist” that puts its own state in the position of a subcontractor that faithfully serves the aforementioned major European power. Still, whenever there is positive competition in Europe and more actors appear interested in developments in the Balkans, it puts us in a situation in which we can afford to choose our allies and devote more energy to furthering our as opposed to foreign interests.

In other words, Serbia has an interest in strengthening ties with France and reversing its withdrawal from Southeast Europe. Unfortunately, ties with developed states cannot be forged overnight. Serbia’s current leadership mostly lacks the language skills and the requisite knowledge of the French political culture. Additionally, it has no substantial contacts with the French elite, be it in business, culture, or intellectual enterprise.

This brings us back to my old thesis which maintains that Serbia’s core problems do not lie in its complex geopolitical situation, but instead in its domestic policies and governance. In order to advance relations with key states in Europe and the world, one needs to raise the existing capacities of one’s own administration, economy, diplomatic service, and analysis. The new French President’s coming to power might serve as a reminder that such issues should be addressed without further delay, for we have been experiencing no bilateral progress between our two countries in the past five years.