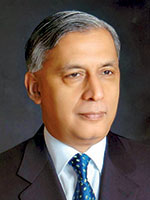 Shaukat Aziz is a former Prime Minister and Finance Minister of Pakistan, having previously served as an Executive Vice President of Citibank. His book, From Banking to the Thorny World of Politics, was published by Quartet in May 2016.

A quarter of a century after the fall of the Berlin Wall, we are facing a rapidly shifting geopolitical environment. The balance of power is no longer weighted towards the West, as Asia continues to gain ever more prominence. The role of existing multilateral alliances is diminishing, as several key global players are increasingly preoccupied with domestic concerns. At the same time, elements of the old Cold War rivalry have been reemerging.

As a result, the geopolitical foundations we have known for decades are making way for a new normal. How we adapt to it will determine the course of our future—and that of our children.

These readjustments have been taking place while the challenges we collectively face change and increase in complexity, and it is time to take a fresh look at how we respond to them. In no area, though, is this more pronounced than in global security. The importance of developing a new long term strategic approach to this crucial field is paramount.

The challenges we face in our increasingly interconnected and globalized world are also more wide-reaching than ever. They include the spread of extremism and terrorism, the threat of economic crises, cyber attacks, epidemics, and the consequences of conflict. Our globalized world means issues that arise in far-flung countries have the potential to affect us all.

As the United States, Russia, China, and, to a lesser extent, Europe, compete for global influence, it is important to acknowledge that geopolitical transformations can bring about periods of heightened uncertainty. Much has been said of the “Thucydides Trap,” in which the Ancient Greek scholar posited that conflict is inevitable when rising powers emerge to rival dominant ones. He warned that when new powers rise—and alter the established status quo—the risk of confrontation increases. While this outcome is not inevitable, it deserves our careful attention to prevent any escalation.

It is only natural that the political order installed after World War II was bound to change. In the twenty-first century, Asia—and, in particular, China—has been at the center of this tectonic shift.Beijing has already established itself as a world player, and is recognized as such by the international community. The economic growth emanating from China, and its progressive economic policies, has been a vital factor in promoting peace, prosperity, and stability in the region.