Why I Believe in America

Muhtar Kent is Chairman and CEO of The Coca-Cola Company. You may follow him on Twitter @MuhtarKent

VENTURING an opinion about the United States can be tricky under the best of circumstances, given that almost everyone has an opinion on the country and its future. Expressing an optimistic view of America is still more challenging—particularly on the cusp of a presidential election year, when the public rhetoric is sure to skew heavily toward what’s struggling and in need of fixing.

My belief in America, however, is both real and pragmatic. As a business leader, I am the ultimate caretaker of our shareholders’ confidence in Coca-Cola—an American company with truly global reach. So while my affection for America is deep and personal, my belief in America must be based on the same kind of due diligence I follow when I look at any market and ask: is this a good place to invest in for the future?

In the United States, I see a market of vast and growing potential. While I am an optimist by nature, I am a realist by experience. Even when accounting for a significant slate of current and future challenges, I believe America’s best days are ahead. And here I’ll explain why.

For starters, the United States is growing: America is poised to add 100 million people over the next 40 years, and its fertility rates are among the highest in the developed world.

While the immigration debate unfolds, a large Hispanic market continues to grow. Annual Hispanic purchasing power is already at $1.5 trillion. And it is expected to increase 50 percent over the next five years. By 2050, the Hispanic population may well account for a third of all Americans.

Despite having one of the world’s most developed economies, America is also a relatively young country, demographically speaking. By 2050, just 25 percent of U.S. residents will be over the age of 60. Compare that to 31 percent in China, 41 percent in Japan, and higher percentages across much of Europe.

The much-covered Millennial generation—those born between 1982 and 2000—are living testimony to the power of youth. In 2014 they represented a quarter of the population, outnumbering their parents—the baby boomer generation—for the first time.

Already, the Millennials have changed consumer marketing in profound ways. They are avid consumers—choosey, digitally connected, and skeptical of traditional marketing messages. Indeed, they often find the endorsements of friends—both real-world and virtual—to be of more value than those of professional critics, analysts, and marketers.

Most notably, Millennials are confident and optimistic—the beating heart of all market growth. They are hopeful for a better world. And, while they hold generally low opinions of government and business institutions, they still recognize the positive potential of both.

As we look ahead, the United States should also continue to be an engine of enterprise and innovation. Today, America is a leader in the world’s entrepreneurial economy, where technology is turning former barriers to global competition into on-ramps for smaller companies.

Individuals and companies in the U.S. currently earn roughly as many patents as the rest of the world combined. And two out of three U.S. jobs are created by businesses that are less than five years old.

Think about the most important breakthroughs of recent years—from big data and social media, to cloud computing, nanotechnology, biotechnology, and more. In every case, America is in or near the lead.

The same is true in the emerging “internet of things,” where digital devices come together in networks—crossing borders, reaching everywhere, talking the same language, thinking.

By 2020, between 40 and 50 billion devices will be connected to the internet. Even now, estimates put the number of internet-enabled devices at more than 16 billion—or more than two for every person on the planet. And, while these are still early days, American companies like Google, GE, Apple, Amazon, and others are among those taking us boldly into the future.

Of course, no position of leadership—regardless of historical, structural, or cultural advantage—is destined to continue based on inertia alone. And, just as China is grappling with more intense competition over its position as the world’s workshop, America will have to compete, learn, and invest in order to hold onto its title as the world’s innovator.

American opportunity continues to be fueled by the promise of potential rewards that can come to innovators—both as individuals and enterprises. Furthermore, U.S. colleges and universities remain the envy of the world, and magnets for top talent from other nations. Both of these serve as growth engines, and are likely to keep creating opportunity far into the future.

Resilience is another reason for my confidence in the United States. Or, as my friend Warren Buffett has said in one way or another for years, he is much more comfortable betting on America than betting against it.

I’ve seen this resilience first-hand, too. I joined Coca-Cola in the late 1970s. Times were difficult and the mood was anxious. Inflation was high, fuel prices spiking. A stubborn recession was sapping confidence and energy. Many wondered if the United States had begun an inexorable economic decline. And then the 1980s and 1990s came along.

In America’s domestic political sphere, combativeness is casting a shadow on collegiality, compromise, and competence. Income disparity is dividing people and shaking the systemic confidence of too many American families and individuals. And Americans are today expressing a resounding lack of trust in the nation’s various institutions.

A 2015 Gallup poll offers a glimpse into this state of mistrust. Today, trust in all institutions—aside from the military and small business—is below historical norms. Trust in “big business” has slipped to 21 percent, while trust in Congress has declined to just 8 percent. And overall institutional confidence is now at the lowest point since Gallup started keeping track in 1993.

To achieve America’s brightest future, these trust gaps must begin to close rather than being allowed to widen further. Leaders will need to step forward to harmonize agendas. And the market system—which has created more wealth for more people than any other approach in human history—must become stronger, more efficient, and more inclusive.

What will this take? From a business perspective, I look for policies that provide smart incentives, strip away obstructionist bureaucracies, and reach out to business, government, and civil society in the spirit of partnership, collaboration, and action.

For our part, the business community must learn to work in better harmony with government and civil society—cracking the calculus for sustainable growth via partnership and collaboration, not confrontation.

At Coca-Cola, we see this potential in the United States and all around the world expressed as a Golden Triangle that brings together business, government, and civil society organizations in new and more cooperative ways, with each side of the triangle doing what it does best.

So, why is there a growing perception that America is fading as an economic power? In large measure, I would say that this shifting balance is not so much about the United States losing steam as it is about other parts of the world surging forward, in Asia, Africa, Latin America, and beyond.

The most compelling direct comparison is with China, which, according to some measurements, passed the United States to become the world’s largest economy in 2014. But quibbling over competing statistics misses the larger point that China and the United States are essentially tied for global economic leadership, along with the European Union.

I will conclude with another American advantage—one that cannot be charted, quantified, or precisely defined. Observing American life at the dawn of the nineteenth century, Alexis de Tocqueville wrote that Americans see “society as a body in a state of improvement.” And I believe this innate, strangely animating optimism lives on—tested and battered though it has been by more than two centuries of history.

Pollsters confirm Americans’ enduring optimism. The Pew Research Center asked respondents around the world a simple question: “Are you having a particularly good day?” The positive responses of Americans stood out among other developed nations.

I have also seen and experienced this optimism, having lived and worked in the United States and all around the world. While cynicism, doubt, and pessimism can send an individual, enterprise, community, or nation into a downward spiral, optimism is the starting point of positive change and improvement.

Born in America, but embraced by people in every land, Coca-Cola has something of this same optimism—as a brand and as a business. And, fittingly, we express our mission as an effort to “refresh the world, inspire moments of optimism and happiness, create value, and make a difference.”

The optimism of the American people—a basic belief that the best is yet to come—is central, I believe, to the success of the United States. Past, present and future.

In other places, this faith in the future may seem wrongheaded, foolish or willfully ignorant, but an optimistic vision of what lies ahead has had a profoundly positive impact on America’s story thus far. Unless we lose it, this outlook should continue to help the United States prosper through the remainder of this decade, and for many more to come. 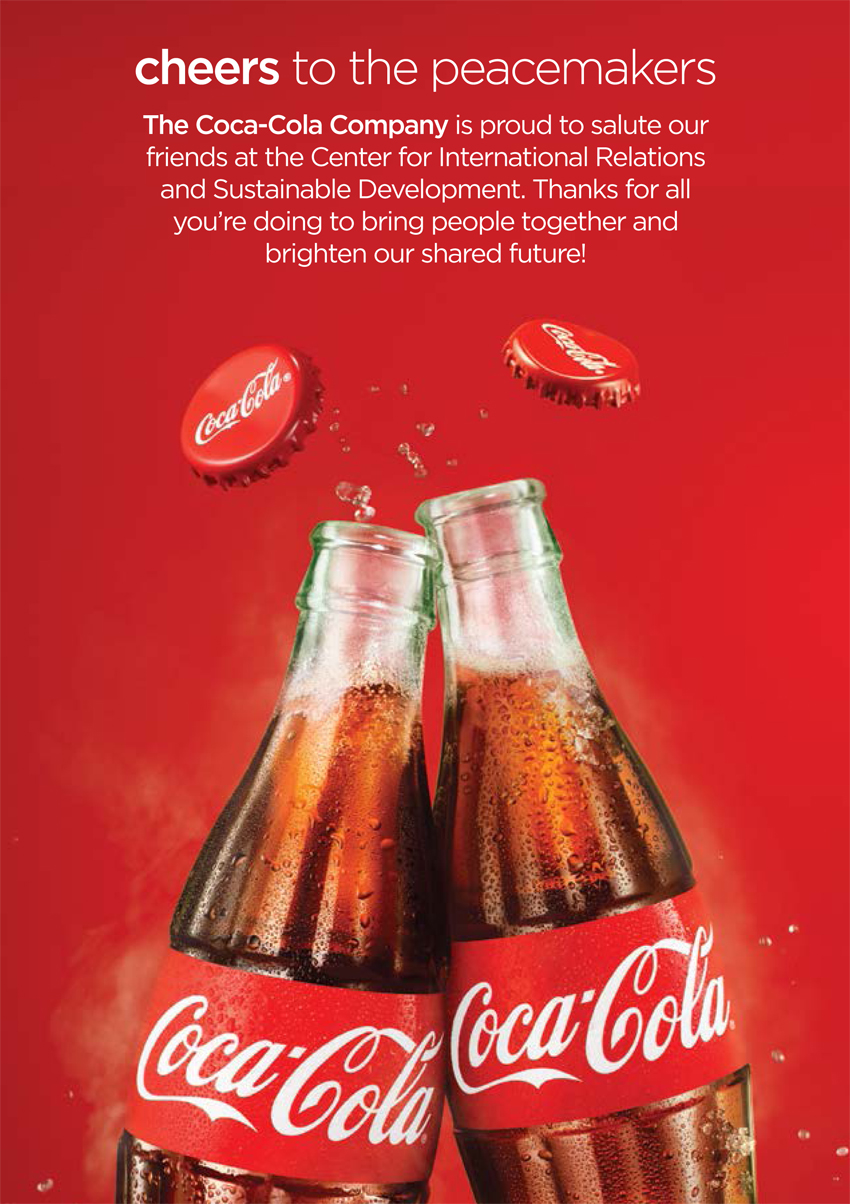