It seems counterintuitive, but the poorer people are, the more complex their financial lives. Relatively speaking, they also pay a significantly higher percentage of their total income for financial services than people at higher levels of the economic pyramid.

About 80 percent of the world’s poor are cut off from even the most basic services provided by banks and other financial service providers. As a result, they are forced to rely on a cash-based system that is expensive, risky, and inefficient.

The poor pay astronomical fees and interest rates to couriers, moneylenders, and other informal providers. If you are a poor worker trying to share cash wages with your family back home, you have to pay a steep transaction fee with every transfer. Globally, the average fee is around 8 percent, but in some places it is much higher—nearly 17 percent when sending money from South Africa, for example. If you are cheated or robbed, there is little recourse. Often, remittances sent to relatives are in cash-carried by friends or bus drivers across hundreds of miles.

If your savings are in the form of jewelry or livestock, you can’t use them to pay for your child’s exam fee or medical bills. Even paying a bill can be time consuming—it might mean traveling all day just to get to the appropriate office. There is also the emotional stress of constantly calculating whether you are going to have enough to feed your family tonight and tomorrow night.

If the world is going to help the poorest people lift themselves out of poverty, they need convenient, low-cost financial services that help them protect and use their financial assets effectively, deal with irregular cash flow, and provide a cushion for financial emergencies. 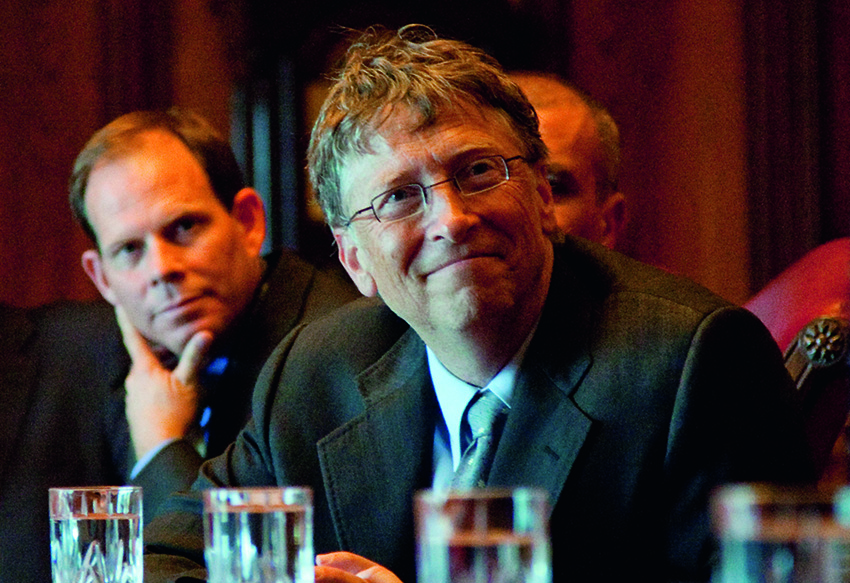 The Benefits of Digital Financial Services

Digital financial services can do this. As mobile phones and cellular-signal coverage have become ubiquitous, universal financial inclusion has become a realistic proposition for the first time in history.

Going digital can cut transaction costs by 90 percent, which changes the fundamental economics of financial services for the poor.

Digitization will for the first time allow poorer people to participate fully in the financial system. It offers the private sector a fantastic opportunity to develop innovative products and services for a vast new market. There are major benefits for government as well.

Just as the introduction of credit and debit cards stimulated trillions of dollars of revenue and created hundreds of thousands of jobs worldwide, digital financial services can unlock the market potential of those currently trapped in the informal economy: the so-called fortune at the bottom of the economic pyramid.

In fact, the transformation has already begun. Because so many people in developing countries have mobile phones, tens of millions of people are storing money digitally on their phones and using their mobile devices to make purchases as if they were debit cards.

Forward-thinking policymakers and private sector collaboration have made this even easier by creating interoperability among mobile network operators and these mobile wallets.

In Kenya, three quarters of adults now have access to a bank account—up from 42 percent in 2011. Mobile banking services are so popular there that traditional banks have begun to offer competing services, which are driving down costs and further increasing access.

While this is great progress, it is not enough to simply declare victory with the opening of a bank account. The real measure of success has to be consistently high usage, super low transaction fees, and innovative digital financial products and services that people want and will use.

What follows are some of the more successful examples.

Leading banks in Tanzania and Kenya are partnering with the humanitarian organization CARE to deliver digital financial services to more than five million members of village savings and loans associations—three quarters of whom are women. These are people that have traditionally been excluded from formal financial services. Initial reports show that participating women are saving more, have more control over their financial resources, and are more likely to start a business.

New digital financial services are helping farmers ride out irregular harvests that would once have spelled disaster. In Kenya, a micro-insurance scheme makes automatic payments to farmers when there is either a drought or excessive rainfall.

Women who use Kenya’s leading mobile money service, M-Pesa, can now borrow funds from family or friends through a simple text message. This avoids the usurious rates charged by some moneylenders, which can range from 10 to 25 percent per month, and even higher in some countries.

Although the digital financial economy is taking shape first in low- and middle-income countries, it will eventually trickle up to high-income countries. When it does, transactions that used to require a trip to the bank, piles of paperwork, and the interventions of several bank employees, will be completed with the touch of a key on a mobile phone.

All these transactions will be easily traceable, gradually building a solid financial history for everyone, making it easier for financial service providers to make decisions about a person’s credit-worthiness while protecting the overall stability of an economy.

A digital financial connection also creates a platform to target and improve government services. Today, if a government wants to give subsidies to its citizens, it has to physically deliver money or resources such as fertilizer or kerosene. Existing processes require the traversing of many layers of bureaucracy, where these resources can easily get lost, diverted, or wasted.

Instant financial transfers using mobile phones will make it possible for government subsidies to reach more of the right people more quickly, and at a much lower cost. Mexico has already saved $1.3 billion by digitizing government payments for wages, pensions, and social transfers.

A Common-Sense Approach to Policymaking

Telecommunications companies, for example, already work with billions of mobile phone subscribers, so they are well positioned to be part of the financial inclusion ecosystem. The same is true for other non-bank entities; yet in many countries they aren’t allowed to provide any financial services at all.

In search of the right balance, some regulators are exploring alternatives that let new players enter the market while maintaining standards of security. For instance, the Reserve Bank of India recently authorized 11 “payments banks” whose customers will be able to use their mobile phones to perform basic, relatively risk-free financial transactions like deposits, payments, and transfers.

Similarly, every country has “Know Your Customer” (KYC) rules, which—reasonably so—require bank customers to be able to prove they are who they claim to be. Most poor people, however, cannot do this easily. Often they don’t have the documents they need and can’t get them. Some don’t even have ID cards. This doesn’t, however, lessen their need for safe, inexpensive financial services.

The Financial Action Task Force (FATF), a multinational body that sets international standards to combat money laundering and the financing of terrorism, supports a risk-based approach to match the level of documentation to the level of risk associated with a transaction. Some countries like Mexico are already applying a tiered approach.

But most countries and financial institutions don’t have enough clarity about how much flexibility or discretion they have when assessing $100 transactions versus $10,000 transfers.

The result is that cross border flows—remittances, correspondent banking, and humanitarian aid—are being shut down, forcing capital to flow instead through an informal economy that is both unsafe and inefficient.

In fact, some efforts aimed at combating money laundering and terrorism financing are having the opposite effect than was intended. Financial flows are going underground, making them less transparent and slowing the ability of countries to bring citizens and small businesses into the formal financial system.

Everyone benefits from an economy that includes everyone, and it is infinitely safer to have people in the system than out of it.

This momentum—and the growing number of international bodies making efforts to provide clarity around de-risking and other regulatory barriers—is encouraging. For instance, the American government hosted its first-ever financial inclusion forum in December 2015. A diverse panel of leaders from government, the private sector, and civil society—including Queen Maxima of the Netherlands, the CEO of JP Morgan, Mexico’s Minister of Finance, and Bill Gates—urged policymakers to communicate clear expectations regarding de-risking so that other countries don’t have to try to second-guess American regulatory and law enforcement behavior and reactions.

The United States, acting together with other countries, can lead the way in modernizing the global financial architecture and capacity for financial inclusion. This can be done in a way that doesn’t add risk to the system, but actually contributes to economic development, financial sector stability, and greater global security overall.

Moreover, there are direct benefits to governments as well. Governments facing fiscal constraints can improve the efficiency of government services and make the best use of limited resources by digitizing bulk payments, such as pensions, wages, and social transfers.

And, as the global community responds to the refugee crisis and future natural disasters, it can employ digital financial delivery channels to speed up humanitarian aid and directly reach particularly vulnerable populations, especially women.

Financial Inclusion and the SDGs

As the world ramps up efforts to begin implementing the new Sustainable Development Goals that form the core of the UN 2030 Agenda for Sustainable Development, financial inclusion—especially via digital financial solutions—can be an important tool to help countries achieve their targets. There is supporting academic evidence that it can play an important role in Goals 1 through 5, as well as Goal 8.

Let me briefly address each of the aforementioned Goals in turn and show how, through tangible examples, this is achievable in practice.

Goal 1: End poverty. In India, an effort to set up accounts for the rural poor reduced the rate of rural poverty by approximately 15 percentage points.

Goal 2: End hunger. Malawian farmers whose earnings were directly deposited into a new bank account increased land cultivation by 5 percent and input expenditures by 10 percent. Their yields were up to 10 percent higher.

Goal 5: Achieve gender equality. According to an FAO estimate, if women had the same access to financial and other productive resources as men, they could increase yields on their farms by 20 to 30 percent.

Goal 8: Economic growth. A recent study indicates that use of mobile phones to access financial services is spurring economic growth in African economies.

Studies show that broader access to, and participation in, the financial system can boost business and job creation, increase investments in education, and directly help people to manage risk and absorb financial shocks.
The world has the technologies and the know-how to do it. What is needed now are policies and regulations that are clear, that encourage competition, and that enable financial and technology innovation.

Digital financial services can help transform the economies of sub-Saharan Africa and South Asia. Especially in rural and remote communities—where traditional bank branches and accounts have long been impractical—digital inclusion can provide millions of people with the opportunity to access and use safe and secure payment, savings, insurance, and credit services. People will be able to send remittances swiftly to loved ones a thousand miles away, with the certainty that it will reach them and without having to pay outrageous transaction fees. They will also be able to more easily save money for emergencies and the future.

These advances—though seemingly small to those of us long accustomed to bank accounts and credit cards—have the potential to truly create a more inclusive global economy that benefits us all.