The Center for International Relations and Sustainable Development (CIRSD) and the United Nations Sustainable Development Solutions Network (SDSN) jointly organized the international conference entitled “Climate Change and the Green Economy” on November 19th and 20th, 2014, in Belgrade, Serbia. The conference brought together world-renowned political figures, business leaders, and academics to address a distinguished audience from Southeast Europe and beyond, focusing on the nexus between climate change and the green economy.

The event took place against the backdrop of ongoing efforts to shape the UN post-2015 sustainable development agenda (Rio+20) and complete the high-level climate change talks (COP21) to be held in Paris in December 2015.

The conference was attended by more than 350 people, with many more having followed the livestream via CIRSD website. The complete video-material can be accessed via the following link: www.cirsd.org

First, to instill in Southeast European politicians, civil servants, business leaders, opinion-makers, and the wider public a sense of the planetary emergency descending upon us.

And third, to explore ways to make the green economy a key vehicle for growth, employment, and poverty reduction in the region, by examining how to encourage market-based solutions to environment-driven challenges. 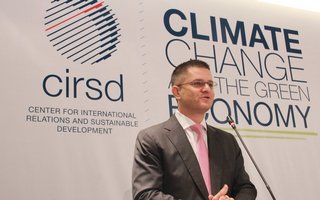 In his introductory remarks, CIRSD President Vuk Jeremić said that Southeast Europe should play a more active role in international climate change negotiations. He added that exploring how developing regions can take more advantage of the global transition to the green economy might well help in overcoming the gap that separates them from the developed world: “We have the chance to overcome our recent social and economic failures, and build up our societies on a sustainable and prosperous foundation," Jeremić said. He added that the region needed to engage more proactively in the COP and post-2015 agenda talks, so it could reach a position from which it could better protect and promote its particular interests.

The complexity of the challenges represented by the transition to the green economy is truly vast—and solely relying on the immediate demands of the market is unlikely to be a recipe for success. All around the world, Jeremić added, strategic economic decisions will increasingly fall within the purview of states, narrowing the conceptual gap between geopolitics and geo-economics.

Jeremić also said: “I believe that in order to create a sustainable future for Southeast Europe, purposeful and complementary steps will need to be taken by both the public and private sectors. Innovation in targeted directions will have to be decidedly encouraged, so as to unleash the ingenuity of the best and brightest scientists, inventors, and entrepreneurs—and thus lay the basis for the production of green economy products and services that can propel the region forward. This may very well be the greatest challenge of our generation. At the end of the long journey lies the prospect of a region transformed—Southeast Europe as a green economy leader, whose contributions to sustainable development are looked upon with pride by those to whom we shall have bequeathed the legacy we endeavor to build.”

During the opening segment of the conference, the audience was addressed by Ambassador Kwok Fook Seng, Singapore Chief Negotiator for Climate Change, Kunihiko Shimada, the Special Adviser to the Environment Ministry of Japan, and CIRSD Board member and Columbia University professor Jeffrey Sachs.

Kwok Fook Seng and Kunihiko Shimada emphasized that the countries of Southeast Europe need to engage more actively in international negotiations on climate change, as well as global sustainable development goals, so they can have their voice heard far beyond the boundaries of the region.

Ambassador Kwok Fook Seng stated that the story “should be about making conscious choices for the wellbeing of future generations. The more effort we put in the reduction of greenhouse gases, the more we slow climate change. Responsible choices in climate policy should not be seen as conscribing economic growth.” He also added that “Southeast Europe does not have the structural constraints which shackle many mature economies. Your emerging economies are still at a point where you can plan and achieve a sustainable, climate-friendly future.”

Kunihiko Shimada said that “the role of local communities is essential to successfully fight climate change.” He also seized this opportunity to announce the opening of the Green Climate Fund, which was founded by the United States and Japan. 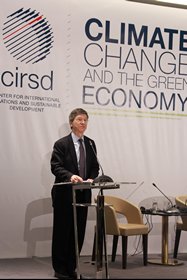 Professor Jeffrey Sachs underscored in his statement that Serbia has the opportunity to become a green economy leader and reiterated SDSN’s eagerness to help the country’s decarbonization process.

He added that the “U.S.-China joint announcement on climate change and energy is the most important advance on the climate change agenda in many years. While the full ramifications will only be known at the climate summit in Paris in December 2015, the two largest C02 emitters have finally spoken, and most importantly, they’ve spoken together. What they’ve said gives the world a fighting chance – and no doubt the last one – for climate safety,” Sachs affirmed.

Sachs concluded that, “the world will need to get almost entirely out of the fossil fuel business in the next half century or so, except for what can be continued safely with the use of carbon capture and storage (CCS). Such a deep transformation is feasible through a combination of three main steps: massive energy efficiency; a pervasive shift to low-carbon and zero-carbon electricity (notably wind, solar, geothermal, hydro, nuclear, and CCS); and the electrification of all vehicle transport and of heating and ventilation in residential and commercial buildings.”

One day before the Conference, the world premiere of Professor Sachs’ new book “The Age of Sustainable Development” took place in Belgrade. The book constitutes an outstanding political vision of the sustainable development concept, the Serbian translation of which was jointly published by CIRSD and one of Serbia’s most respected publishing houses Sluzbeni glasnik. 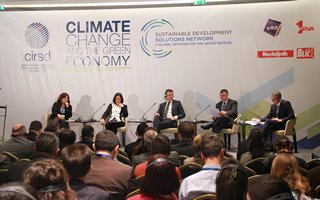 The ministers concluded that Southeast Europe had possessed the potential to achieve sustainable development by means of sustainable tourism, organic agriculture, and using renewable energy resources. They also agreed that it remains necessary to achieve better coordination between the region’s states, especially when it comes to rethinking and conducting development strategies, and formulating a common approach in the framework of key international negotiations. 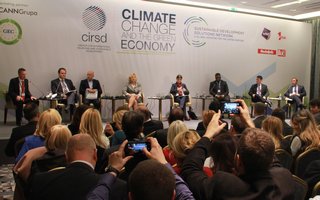 The second panel entitled Green Markets and Investments featured remarks by the president of the Serbian Business Club Privrednik Miodrag Kostić, the President of the Serbian Association of Economists Aleksandar Vlahović, Agrokor Group’s Senior Executive Vice-President Ljerka Puljić, the Director of Continental Wind Serbia Ana Brnabić, the Chief Operating Officer of Hecate Energy Nick Bullinger, Masdar’s Clean Energy Director Bader al-Lamki, and the Co-Founder of Aephoria.Net Petros Kokkalis. One of the panel’s key conclusions was that overcoming the effects of climate change through the transition to a low-carbon, green economy will require the establishment of a comprehensive global public-private partnership. The panelists agreed on the necessity to create an improved regulatory framework for investments in renewable energy sources, as well as the need to incentivize both state and private actors to devote much more effort to reducing energy inefficiency and dependency on lignite.

Bader al-Lamki and Nick Bullinger also gave press statements following the panel, in which both underscored that Southeast Europe has a visible potential and a realistic chance of making a giant leap forward by promoting different aspects of the green economy. Should the region seize the presented opportunity, international companies will undoubtedly show their interest for investing in all its green economy areas. Al-Lamki underlined the readiness of Masdar to support Serbia’s transition from the brown to the green economy. “The Balkans is an emerging economy which can still shape its structure and nature,” he concluded.