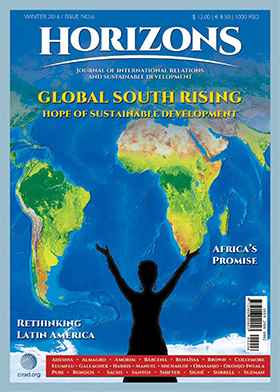 TWO historic diplomatic breakthroughs took place in 2015 under the auspices of the United Nations: the approval of the 2030 Agenda for Sustainable Development in New York, followed by the adoption of the COP21 Climate Agreement in Paris.

AN even greater challenge now awaits us: last year’s commitments need to start being implemented—by all and in full. Such a comprehensive undertaking will necessitate a coordinated, multilateral, goal-oriented, and solutions-driven policy process—unprecedented in scale, scope, and pace.

DESPITE some profound disagreements on how to address multiplying geopolitical challenges, the success of the sustainable development agenda and its climate provisions is predicated on nations working more closely together on achieving common and measurable goals, with the Global South seeking to assume an increasingly pronounced role in world affairs.

THE 2030 Agenda will be crucially tested in Africa, as pointed out by several authors in the present issue of Horizons. As the continent aspires to expand its engagement with the rest of the world, it remains resolute in championing African solutions to African problems.

ACROSS the continent, many countries are making gains in areas such as democratic governance, human rights, healthcare, education, and infrastructure building. Moreover, progress is being made in job creation, as well as in the fight against corruption and inequality. Security concerns—ranging from law and order issues to peacekeeping and fighting terrorism—are also being prioritized, in response to continued instability in areas like the Sahel and the Horn.

ACROSS the Atlantic, another part of the Global South appears to be less directly affected by contemporary upheavals. Its stable demographics, nuclear-free status, and lack of divisive military alliances and sectarian extremism—amongst other factors—suggest that the sustainable development of Latin America is an eminently attainable proposition.

AS some of our contributors point out, however, Latin America’s structural economic problems—as well as longstanding concerns about drugs, violence, and inequality—will require considerable attention in the years ahead; so will looming governance crises and insufficient progress in strengthening regional cooperation. Nonetheless, two important recent developments—the U.S.-Cuba rapprochement and Colombia’s peace accords—point to a hopeful direction in which the Western Hemisphere may be heading.

THE Winter 2016 edition of our journal concludes with a reflection on the Global South’s two most populous states: India and China. The consequences of their rising diplomatic confidence and growing economic clout will be increasingly felt throughout the world, as the international community endeavors to achieve sustainable development for the coming generations.