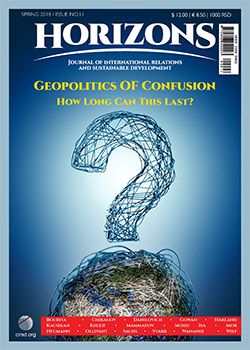 WE are contemporaries of an age of geopolitical confusion. The present world order— which originates in the 1945 Treaty of San Francisco—seems to be fraying at the seams.

IT has become clear that the principal stewards of the international system have not yet found an adequate response to the accelerated rate of erosion of inter-state trust. This has adversely affected their collective ability to uphold the core principles of legitimacy that form the basis of global governance.

THE situation has not been improved by the fact that, in many of the capitals concerned, domestic politics have, of late, been marked by increasing acrimony and dysfunction, which has naturally spilled over into how foreign policy is executed. This has in no small measure contributed to the palpable change in the capabilities of major players to effectively project power abroad, both in absolute terms and relative to that of others.

THE resulting commotion has whetted the ambitions of a growing list of regional actors that perceive themselves—rightly or wrongly—capable of maneuvering for greater influence, to do so with fewer restraints.

THIS is presenting grave difficulties for diplomats the world-over. Of course, officials high and low still meet regularly with each other in bilateral settings, regional fora, and multilateral venues like the United Nations. But their discourse has progressively become transactional. As old rules steadily lose their edge without new ones coming in their wake, there is less and less room for envoys to persuade one other, reason together, and act in a conciliatory fashion.

THE vital issue of nuclear capability and non-proliferation is being tackled in profoundly different ways on opposite sides of Asia. The cases of Iran and North Korea have at least two distressing things in common: neglecting the UN’s traditional function of bestowing indisputable legitimacy to both process and outcome; and a quadripartite distinction increasingly typical of contemporary international negotiations, whereby it is one thing to give your word, another to put it in writing, a further one to follow through with consistent execution, and yet a fourth to ensure that what has become binding by treaty or agreement remains so in the future—regardless of domestic political developments.

IN this and subsequent editions of Horizons, authors will seek to assess the current state of the international system, which parts of it still work well, and why; but they will also focus on those aspects that necessitate reconsideration, lay out proposals on how the challenges we face can be overcome, and, each in his or her own way, address the fundamental question of our time: how long can the present state of geopolitical confusion last?