Shaukat Aziz is a former Prime Minister and Finance Minister of Pakistan, having previously served as an Executive Vice President of Citibank. 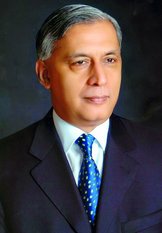 ASIA will undeniably be the focal point of geopolitics in the twenty-first century, a fact reinforced by the continent’s demographics, economic strength, and increasing importance on the global political stage.

The region is home to nearly two-thirds of the world’s population—a proportion only set to increase further as a result of its strong demographics. Asia is already an engine of growth for the world economy. Its number of middle class consumers is growing rapidly: it is expected to soon reach one billion and to exceed the three billion mark by 2030 (according to the Organization for Economic Co-operation and Development). These strong fundamentals are reinforced by the ways in which Asian economies and societies have been rapidly changing and modernizing over the past few years.

At the center of this tectonic shift is China, given its rapid economic growth and scale of poverty eradication. The number of people living in extreme poverty—less than $1.25 a day—has halved since 1990, according to the latest World Bank report. The growth emanating from China, and its progressive economic policy of boosting connectivity with other countries, has been a vital factor in improving linkages for trade and investment.

China has already emerged as a global power and is recognized as such by the international community. As it continues to grow, incomes will rise and consumption levels will increase, making China a significant market for the world economy. Under the leadership of President Xi Jinping, it is now going through a process of reform and improved governance, which sees China playing a greater role internationally.
In response to its growing economic stature, it is natural that China’s geopolitical influence will keep rising. This has already been seen in the security and development dynamics within Asia. China is now poised to look beyond its own region and engage with the wider world. Inevitably, the global political order installed by the Western powers after World War II is set to change, although the direction this will take remains to be seen. This is a question troubling analysts and policymakers in many countries who watch China’s assent with trepidation.

For years, Beijing’s stated policy has been the pursuit of a ‘peaceful rise’ and ‘peaceful development.’ Its leadership has always been keen to emphasize this, downplaying any suggestion of growing influence, and its foreign policy has avoided any dramatic moves.

However, if China is to become the world,s economic leader, expected to eventually surpass the United States in terms of GDP, then its defense capability should reflect its status as a global power.

China is already expanding its military capability; it has been building the strength of the People’s Liberation Army (PLA) since the turn of the millennium, as well as upgrading its training and technology.