Erik Berglof is Director of the Institute of Global Affairs at the London School of Economics and Political Science, and a former Chief Economist and Special Adviser to the President of the European Bank for Reconstruction and Development (EBRD) 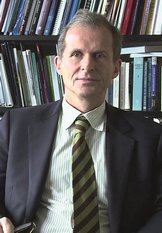 TWENTY-FIVE years after the fall of the Berlin Wall, an atmosphere of distrust and mutual recrimination is again descending on the European continent. The impact of the worsening climate is all too clear to the countries immediately affected. Thousands of Ukrainian and hundreds of Russian lives have already been lost, and infrastructure in eastern Ukraine has been badly damaged. Ukraine’s battered economy is unlikely to pick up as long as the war continues, and the ongoing downward slide in Russian economic growth will be amplified by existing sanctions and countersanctions.

What might not be obvious are the wider economic costs of the worsened political climate for individual countries, for Europe as a whole, and indeed for the world economy.

What is at stake is the so-called “peace dividend” from the end of the Cold War. Popularized by George H. W. Bush and Margaret Thatcher in the early 1990s, the term referred primarily to the gains in growth and overall social wellbeing that would come from redirecting largely unproductive military outlays to public infrastructure, health, and education.

But the economic benefits from the end of the Cold War have, of course, gone far beyond reduced defense expenditures. Trade and investment flows have normalized, and a terribly wasteful and environmentally destructive economic system has been replaced by one that is—though far from perfect—much more efficient in its use of resources, and less environmentally disastrous. Putting an economic value to the improvements in human rights, such as the freedom of expression and the right to travel, is much more difficult, but, properly estimated, these benefits to overall social wellbeing are likely to be even greater.

We have come to take most of these economic benefits for granted over the past quarter century; but now the “peace dividend”—crucial as it proved to be during a difficult period for many economies in Europe—has morphed into its very opposite: a geopolitical tax.

That tax, thankfully, is not yet at the levels to which we became accustomed during the Cold War, but it is still substantial. Military spending is up, trade and investment flows have been interrupted, and economic and political reforms—already stuck throughout much of Central and Eastern Europe—look even less likely to get back on track in the next decade.